Times Sure Have Changed

Times Sure Have Changed

I have used this little story to get a laugh many times in the past. I tell it to balance out another parent’s story of frustration and terror raising and/or dealing with a teenager living under his or her roof. Times change, the majority of the time we complain because it is always for the worse. We are never happy. We ask for economic growth and larger tax bases then we proclaim vehemently how much we hate overcrowding and development.

This story fits in there somewhere but on a much lighter scale. It has to do with a teenage son asking his panic-stricken parents for permission to get his ear pierced. This happened several years ago yet the scenario is a vivid memory I enjoy reliving. He was serious, straightforward, and amazingly professional with his request. “I would like to get my ear pierced?” He was not telling as most teens might do. He was in the process of selling a product; “Himself”. Well, we had always been very open with our two sons and we respected the way he handled the well-scripted sales pitch. First, we wanted a chance to analyze the consequence of our decision. We struck a deal, parent to child, a written contract was not necessary. Teenagers can remember letter by letter any agreement you make as long as the outcome benefits them. If it is the other way around, all bets are off. The life-altering contract read as follows, “Wait three months, if at that time you still want your ear pierced we will personally take you to a reputable business to have it done.” hoping beyond hope that this was just another fleeting teen phase. Three months to the day and there he is, car keys in hand, “Let’s go!”

Well, to neatly tie up the end of this story I have to finish with a, “Times sure have changed” adage. I took my then 14yr old son out to the mall for his first and I believe his last piercing. I did it with pride and no prejudice. I was proud of how he handled the request and never once questioned whether, we as parents, would hold up our end of the bargain. In teenager rearing terms, “That’s Huge!” We entered the mall father and son, side by side, a new-age rite of passage. We walked out of the mall each with a newfound respect for each other based on keeping one’s word and having the integrity to follow through with an uncomfortable outcome.

Well as any proud father will do when his son reaches another milestone in his life; I called my father to break the news about his ear pierced grandson. “Dad, do you remember the day you bought me my first BB gun? Have I got a story for you!”

Posted by Raining Iguanas at 10:33 PM No comments: 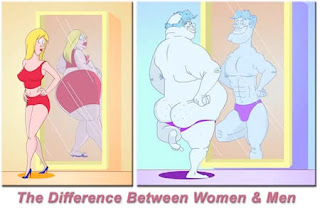 Man Mirror
By John Greenwood
It is a special mirror
Unlike the female version
Man Mirror is magic
It flattens, flatters and fixes
Man Mirror creates strength
Full thick manes of blondness
No hesitation, no insecurity
Man Mirror inverts numbers
52’s become 25’s
Wrinkles become muscles
Grey t-shirts transform
Dads into starting quarterbacks
Boys into men
Men into boys
Man Mirror steamy and hot
Make reflections like
No imperfections
No flaws
All appear clean, cut, and vibrant
Who can resist the vision that stands there
Strong, tall rippled Adonis
Man Mirror
Man Mirror
On the wall
Who’s the fairest of…
I wrote the poem in 2008.
I was sent the cartoon above July 2010.
I took it as a sign to put them together.
JRG
September
2008
Posted by Raining Iguanas at 6:12 PM 10 comments:

Devil on the line

No place to hide

I wrote this as the economy crumbled and people everywhere struggled to survive. College students swamped with credit card offers. Mail boxes stuffed to capacity with visions of life in the fast lane. Families caught in the web of unattainable happiness via plastic promises destined to destroy us all.

Alone behind the wheel

Alone behind the wheel
By John R. Greenwood
October in full bloom, radio low or not. Windows open, sweatshirt sleeves pulled up forearm high, a day to kill with no one waiting, tank full of gas, no map, no plan, no destination. Point the pickup north and go. That road looks good. A long dirt road with houses scattered few and far, with old empty barns, grey and tilted. Stonewalls taper off in oak-leave forests. Squirrels salute, pull tails up, and flee. The faint sound of honking geese cause shadow glimpses high above. Take time to think- time to ponder. Who has time to ponder anymore? Who cares enough to? Road narrows and comes to a T.
Right or left?
Does it matter?
J.R.G.2009
Posted by Raining Iguanas at 10:36 PM 7 comments:

This is a story about a fond Saratoga Springs memory.

The cost of the Saratogian Pink Sheet was 15¢ a copy when I sold my first paper around 1967. The Saratogian received 10¢ and the paperboy kept 5¢ plus tips. On an average night, I would haul in $3 to $4. Five or six of my friends were also selling the paper. The Saratogian racing supplement came out approximately one hour after the last race of the day. We would all wait anxiously in Saratogian's pressroom in the basement on Lake Avenue. Mr. Shay was the circulation manager at the time. His son Bill was a professional paperboy. He had an afternoon Saratogian route in Greenfield Center for years but his August Pink Sheet route was the best. It encompassed several of Saratoga’s finest August establishments of the day- Spuyten Dyvil, Fasig-Tipton Sales Pavilion, the Reading Room, Siro’s Steak House, and the Lantern Lodge. He had the real money route, with lots of cash, big tips, and big spenders. Bill Jr. could rake in $10 or more a night leaving the rest of us jealous and half as wealthy.

The paper would literally be “hot off the press” and we would all pile into Mr. Shay’s Plymouth station wagon with the fake woodgrain panels. He would then distribute us around various locations in the city.

My night began at the corner of Lincoln Ave and So. Broadway, proclaiming as loudly as possible, “Get your Pink Sheet here, today’s results, tomorrow’s entries!” “Today’s results” always cinched the deal. “You have the results of the last race?” they would ask. “Yes sir!” “And tomorrow’s entries!” I would reply. No one else had printed results until the following day. For those who left the track early, they had to have it. The excited customer would grab a copy and quickly pull it apart as they nodded to their wife or girlfriend to, “pay the boy”. The majority of the time it was a disappointed look of a fourth or fifth place finish but occasionally it was a shout of success when their long shot or late double paid off big. Those were the nights that tips would more than cover the cost of a Dairy Queen milkshake at the end of the night.

After heading down So Broadway, I would pop into Mr. Chips’ Gideon Furniture Store, where “Poker” the owner, would instruct his brother-in-law Jim Howe to, “Pay the boy, and don’t forget the tip!”
The next stop would be the Spa City Diner where I would pace up and down the counter trying to peddle an arm full of Pink Sheets without disturbing anyone. I would be scared and hesitant the entire time because there was nothing more frightening to a mild mannered twelve-year-old than temperamental restaurateur John Kontos in August. He would glare down at me because I was in the way of the busy servers. All it took was “that look” and you knew time it was time to go. Out the door, I scooted with a quick 60¢ profit.
Across the street was Twin’s Diner. The Twin’s Diner had good food, a calmer atmosphere and better tippers. By now I'd be up $1.75, the night was young, and the best spot in town was still ahead. First, it was another zag across the street to Topper Pontiac. There I would find a handful of men sitting in lawn chairs, legs crossed and swinging, relaxing in front of the large garage doors. They would be watching traffic and discussing the days hits and misses, soaking in the warm August evening. They were always good for a paper or two, a generous tip, and an encouraging word.

The grand finale of the evening was right next door. It was the restaurant of restaurants. The Trade Winds was one of the great Saratoga restaurants in the 60’s. That list was impressive. There was The Country Gentlemen, Ash Grove Inn, Wishing Well, and Mother Goldsmith’s to name a few. There were dozens more. The Trade Winds was a beautiful stone, hand built piece of art. The stonework, heavy hardwood doors with black steel hinges, and the indoor waterfall were massive and as legendary as the delicious steaks they served. The prices were high but hungry race goers swarmed there after the last race and well into the evening. Here the clientele were “easy pickins” for a polite twelve-year-old boy selling papers to “save for college”. Tips were always better if you answered, “Yes” when asked if you were saving for college. All I really wanted was to generate enough profit for that milkshake and a round of miniature golf. I remember one large and obviously wealthy man who came through every night. He was always, “pretoxicated” from his day at the track. His well-dressed and very patient wife always led him by the arm. Smiling graciously, she would guide him in - and she would guide him out. Each night without fail, I experienced the “Holy Grail” of the evening when he purchased one Pink Sheet with a dollar bill. “Keep the change” invariably followed and off into the dark parking lot they would fade.

Mr. Shay would come to pick us up around eight o’clock. We would plead for him to take us out to Murphy’s for a round of miniature golf under the lights. After what I am sure was at least a 12-14 hour day for him, he would always oblige and grant our wishes. I often wonder if Mr. Shay looked fondly on those times. I have a feeling he did. He kept us off the streets by putting us on the streets. He gave us direction and treated us fairly. As an adult, I look back and admire his involvement in shaping the work ethic of a group of young boys. Thank you Mr. Shay, and thank you Pink Sheet. 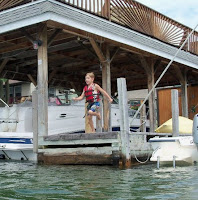 That boy can fly!

Posted by Raining Iguanas at 2:09 PM No comments: