Did He Really Say That?

Did He Really Say That?
By John R. Greenwood 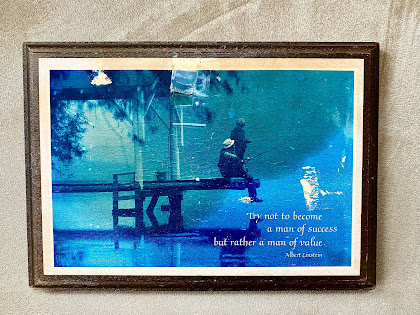 On Father’s Day 1979, my wife gave me a small 5x7 Hallmark plaque with a photograph of a man and a boy fishing off the end of a dock. The inscription in the bottom right-hand corner read:
“Try not to become a man of success but rather a man of value.” —Albert Einstein

My sons were only one and four at the time, and I’d just taken a huge leap of faith by purchasing Price’s Dairy from Victor Price. My wife and I were in our early twenties with little money and even less business experience. Basically, it was the Price’s Dairy name, a milk route, and a few old trucks. We had nothing to lose. The next ten years were the hardest and most rewarding years of my life. I amassed a lifetime of friends and memories in one decade, and although it was heartbreaking to see it end, I never regretted one day of it.
The little wooden Hallmark plaque graced my desk throughout the Price’s Dairy years. When I went to work for Stewart’s and earned a management position in the Hauling Office, the plaque came with me. It would remain on my desk until I retired in 2019. It’s in front of me right now as I write this. Although the quote has been my mantra and roadmap whenever I sought the answer to life’s meaning, I always wondered whether Albert Einstein was really the source. 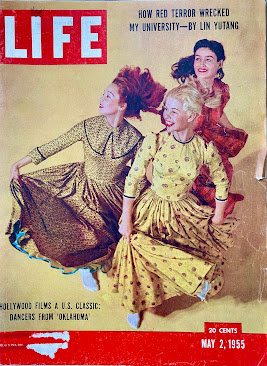 Several weeks ago, I was looking for something to write. I’d been neglecting this blog, and it deserved a little nourishment. I set out to prove or disprove whether or not my buddy Al was as proficient with his prose as he was in his calculations. Where do I start? Google has yet to let me down—this was no exception. When I typed in the quote and asked whether or not Albert Einstein was indeed responsible, Google directed me to a May 2, 1955 issue of Life Magazine, which contained an article titled “Death of a Genius.” The article appeared one month after Einstein’s death and a month before I was born. Now all I needed was to find the quote. Thanks to the power of the internet and Google, I could page through the entire issue. In the process, I was able to locate it. One of Life’s editors, William Miller, his son Pat, a Harvard freshman at the time, and Professor William Hermanns, a friend of Einstein’s from Germany, visited Einstein some months before his death. During the visit, the four men discussed the importance of staying curious. 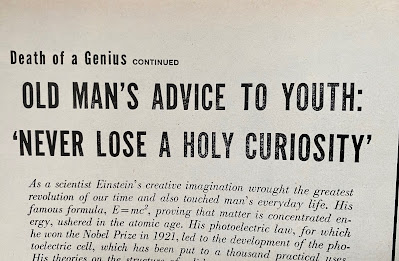 Einstein explained, “Curiosity has its own reason for existence. One cannot help but be in awe when he contemplates the mysteries of eternity, of life, of the marvelous structure of reality. It is enough if one tries merely to comprehend a little of this mystery each day. Never lose a holy curiosity. Try not to become a man of success, but rather try to become a man of value. He is considered successful in our day who gets more out of life than he puts in. But a man of value will give more than he receives.” 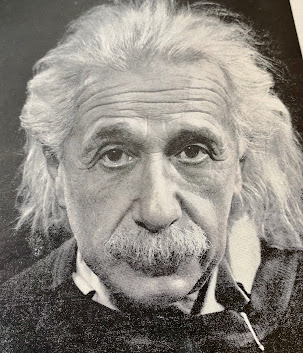 Finding the roots and context of my mantra for the last forty years helped me understand its significance. As a man constantly searching for signs to guide me, this felt like confirmation that maybe I’d been on the right road all along.

Thanks to Zubal Books of Cleveland, Ohio, I now have an original issue of that May 2, 1955, Life Magazine, and I couldn’t be happier.

Posted by Raining Iguanas at 8:59 AM No comments: