Released Into The Wild

Released Into The Wild
By John R. Greenwood 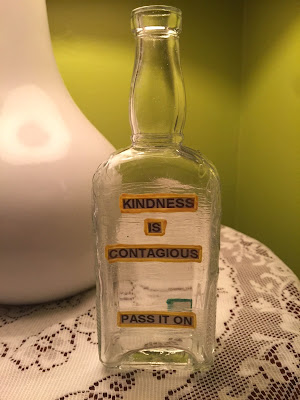 I’m conducting an experiment. I want to take the simplest of ideas and use it to create a buzz, an interest, a conversation. It isn’t that I’ve run out of things to write about its that I want to try my hand at a visual art. The problem for me has always been a lack of patience and skill. I shake like a December chihuahua whenever I try to do something requiring a steady hand. I have the attention span of a first grader when it comes to creating something that might take more than 10 minutes to assemble. I can’t draw a bath, and almost every sweatshirt I own has the remnants of a room or building I’ve painted sometime in the last three decades. So, I tried to come up with something different that would allow me to exercise my bulky and uncoordinated creative muscles.

Here’s my highly detailed and elaborate plan. I have old wooden boxes filled with antique bottles. My father dug the majority of them within miles of my home. My thought was to write a favorite quote on one and leave it in a random location nearby. I wouldn’t leave any detailed information with it but I would record via photograph each bottles authenticity and origin. Since my readership on this blog is limited,the chances that the person who discovers the bottle would have any idea who made it or where it came from would be slim at best. My hope was to light the fuse of interest on this end, plant the bottle a few miles away in a public place and see if there were any chance of getting the two to meet? If that ever happened, I would take the opportunity to ask the person who found it what their thoughts were when they first picked up the abandoned bottle with the simple message on it. Did it peak their curiosity? Did it bring a smile to their face? Did it stir up an emotion of any kind? Did they think someone was trying to speak to them from a different place?

As a child I always loved the story of Johnny Appleseed. One reason was, I was called Johnny by my friends and family. Reason two, I liked the premise of planting a seed and waiting to see what would happen. Spread positive seeds over a large area and hopefully good things will sprout up all over. I feel the people in this country have gone mad and they're spreading their insanity over the heads of our children. I wanted to spread something less poisonous than criticism and hate. I want to plant optimism and wonder. It’s not too late to repair the damage thats been made. At least that’s what one old hope-farmer is counting on.

So, if you hear of someone finding an old bottle with a quote made with a DYMO Label Maker, Sharpie Paint Pen, and the Initial’s RI on it somewhere, have them get a hold of me, we need to talk…

A Visit (Not Today)

A Visit (Not Today)
By John R.Greenwood

I felt the urge to sprinkle some words down on paper and bring them with me for my visit. Like bringing a three-bean casserole or loaf of fresh baked banana-nut bread. People don’t come for visits anymore. There are no surprise knocks on the door. Saturday afternoon visits in the knotty-pine den in my childhood home are now reduced to clicking a Facebook “like” on a friends dinner plate photo. There are no faces or voices left, only vagueness and a slight sense of what their laugh was like when someone shared a, “Remember the time” moment.

Growing up, our front door was never locked. In fact, unless it was cold enough for the heat to be on, the front door was usually propped open with a ceramic frog. There was no peephole or deadbolt. No paint or varnish either.

When my father’s friend Jack came to visit he would knock a half-dozen machine gun knocks then burst in the door. You always knew it was Jack by the way he stomped his feet on the  coco fiber Welcome mat. I smile thinking of his forced entry, his wavy grey hair, and his gossipy news from the village up the road a mile.

I miss those days when friends and relatives would pull in the driveway unexpectedly and stay for a long afternoon visit. I miss the shared stories, the laughing, and the intimacy of real live people in our home. That’s why I needed to write this down and share it, so that you might unfold the moment one day and recall the day a friend stopped by for a visit.

* I wrote this piece in anticipation of sharing it with a writing class I was planning to visit this morning. As I've been known to do I got the date wrong and the class had been moved to another date. I thought the simple piece was still worth sharing here. Thanks for stopping by, it's been awhile... -jrg