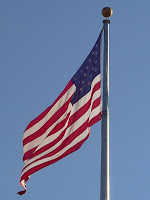 To those in need 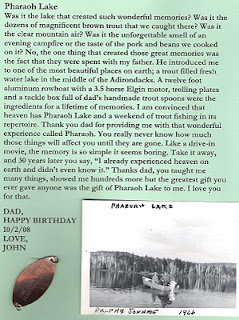 Dad passed away February 27,2009. I wrote this piece and gave it to him on his 85th Birthday. This photo is one of my prize possessions.
Posted by Raining Iguanas at 12:02 AM No comments:

Cobwebs in my Asics 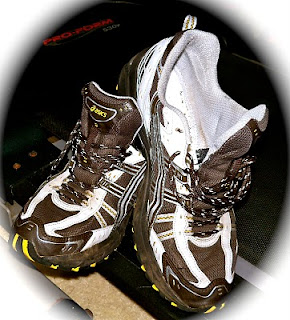 Cobwebs in my Asics
By John R. Greenwood
Days slip away
Workouts but a
Faint memory
Scales reveal
Like a calendar
Tight pants and
Depressed thoughts
Cobwebs in my Asics
Tell the tale
Tic Toc
Small hand on the five
Turn up the music
Laces snug
One mile
Then two
J.R.G.6.17.10
Posted by Raining Iguanas at 12:10 AM 2 comments:

Life is Where You Look

Life Is Where You Look

As a leftover milkman, it’s in my blood to be up early in the morning. On a recent morning in June 2009, the anniversary of my birth over a half century earlier, I decided to take an early morning walk as a gift to myself.

I have lived in Saratoga County all my life. I grew up in Greenfield Center, attended school in Saratoga Springs, and raised a family in Wilton. I have witnessed all the growth and development this area has experienced over the past few decades. In my little corner of the world on Waller Road in Wilton, I am surrounded by hundreds of homes where once there were forest, field, and farmland. In some ways that is sad, but it has been a great place to grow up with my family. We have nice people all around us. I have a good steady job close by. Saratoga Springs has a great school system. There are churches of all kinds, a wide variety of stores, and so much more. The history and quality of life this area provides are two of its finest components.

Well, as I took my birthday walk I also spent some time reflecting about life in general. What’s in store for me? What’s next on life’s shopping list? As I came to the end of my road, where Waller meets Route #9, I stopped to listen to the chorus of songbirds and quiet that surrounded me in this now highly developed area. After all, it was 6am on a Sunday morning. It was then that I heard the most beautiful songbird singing high atop a light pole in a nearby parking lot. I approached it slowly. I could not believe what I was hearing. The sounds were crisp and distinct, but rapidly changing, as if mechanical. Chirp, chirp, chirp, whistle, whistle, caw, caw, caw, the concert grew louder and more intriguing. Was that the sound of a kitten’s meow? I swear I heard a cricket on top of that light pole. For a brief moment, I hear the cry of a seagull, but there are no seagulls in sight. One of the most amazing creatures I have ever experienced, the mockingbird, was providing this medley of animal and insect sounds. If you have never witnessed this display of talent, you will not believe your ears. My heart raced, I wanted to capture nature’s personal birthday gift to me. No one would believe what I was listening to right smack dab in the middle of new homes, townhouses, and offices. We can despise or embrace technology and growth, but just as I was about to go down that path of longing for the good old days, I reached into my back pocket and pulled out life’s most revered technological wonder, a cell phone. It was just a few days old and has more options than a new Toyota. As I researched its abilities, I remembered seeing an audio icon with the word recorder listed below it. Could I actually use this phone to tape record these sounds? Now, if I can just figure it out before the concert ends. With slightly more technological skill than a cement block, I was able to push record and taping began.

This feathered master of imitation, the mockingbird can recreate sounds that you cannot imagine. Here are just a few I was able to identify: robin, bullfrog, whippoorwill, chipmunk, crow, nuthatch, and as I mentioned previously a kitten’s meow. Just when I thought I had watched enough Animal Planet and National Geographic Channel to see and learn everything humanly possible about wildlife, it happened. I opened my birthday gift from above. The most amazing sound to ever echo through the treetops came from that little bird of black, grey, and white, a sound that will make any man, woman, or child stop dead in their tracks and listen, the piercing shrill of a modern day car alarm. I cannot replicate the sound with words but that mockingbird, the size of a quart of milk, blasted off a half dozen shrills and whistles unmistakably identified as a human manufactured car alarm, and I just recorded it on my cell phone.

There are many gifts in life; a beautiful wife, healthy warm-hearted sons, harvest moons, and Cape May sunsets, but this was something special. I have a newfound appreciation for technology and I have a new mantra for my second fifty, “Life is where you look”.

Please note * This video was taken 1 year later in the same parking lot where I first recorded the Mocking Bird. I lost the original sound recording when I had to change phones several months ago.

Posted by Raining Iguanas at 9:24 AM No comments:

I grabbed a coat

The smell of wet oak leaves permeate the air

I understand thinning of the herd

Yet, I cheer for them

To escape the harm

The bullets spray their way

The early morning silence is broken

In the hilltops while I walk

That come their way

Oh what a quiet morning

Shattered by that sound

As my steps bring me closer to the wood

I tilt my head

How many deer could there be?

I tilt my head, trying to decipher the reason

Could the deer be fighting back,

For solitude and peace

Has turned into a nightmare

As I began to turn, and go back home to quiet walls

I’ve heard that sound before

A sound I’ve made myself

Everyone wins this cool November morning

The man with the hammer, his roof complete

My walk fulfilled, my heart, is light

And smells the wet oak leaves

And dreams of points to grace his wall...

Posted by Raining Iguanas at 5:39 PM No comments: 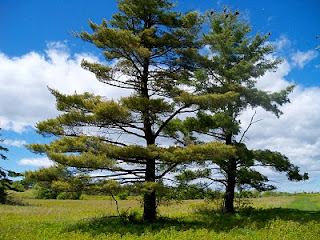