I am sure at first glance; you thought this piece was about airport security. The truth is I am in the Guinness Book of World Records as the only living man with gray hair and grandchildren that has never been up in an airplane or in an airport. No, this story is about something every male from nine to ninety-nine has dreamed about at some point in his life. That dream is to own a metal detector. You know, one of those long black handled devices with the large round disk on the end. Some have earphones. All have little boy dreams of buried treasure; gold rings and valuable coins just below the earth’s surface just waiting for someone to make that life altering discovery. It is a universal dream that never wanes. The anticipation is the hook; much like spending hour after hour in a rowboat waiting for that elusive trout to bite. Well, my generous wife on the 53rd anniversary of my birth presented the greatest gift a man could ever receive to me. She got me good! I had no clue. Who would? I always thought the only people who owned metal detectors were wealthy lottery winners who had nothing better to spend their money on. You know, money goes where money is. Win some money dig up more money. Find a little buried treasure; it is the All American Dream. Four and a half minutes later, I was stripping the smoke detectors of their 9-volt batteries and firing up the black beauty. Vast wealth and riches were just a beep…beep…beep… away. Forty-five minutes later, my backyard is a mortar-riddled expanse of craters and dirt piles. Not to worry, the rewards are already piling up. Over on the picnic table, spread out like the treasures of a sunken Spanish galleon are clumps of old rusted stove pipe, three bottle caps, an old screwdriver I left on the rear bumper of my pickup truck back in 1983 and this was just the beginning! Somewhere in the world there is a man dreaming of finding the Holy Grail in the sands of the town beach. Thanks to my beautiful wife for giving me, the gift men’s dreams are made of. 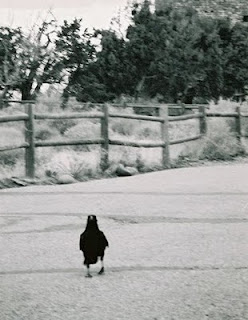 As I drove to work one day

An observation came my way

In the road, eating fries

The stance defiant, no urge for flight

As if, I was wrong, and he was right

No beg for mercy 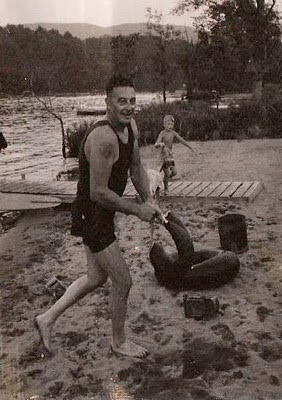 I’ll teach my sons
As you taught me

Photograph - That is my father in the foreground and me as a little boy behind him. The beach was owned by Charlie Atwell and was located on the east side of the Hudson about half-way between Corinth and Lake Luzerne. I learned to swim at that beach.

Posted by Raining Iguanas at 6:06 PM No comments:

Where did you go

We learn to hate

Fallen out of favor

Is just a phase