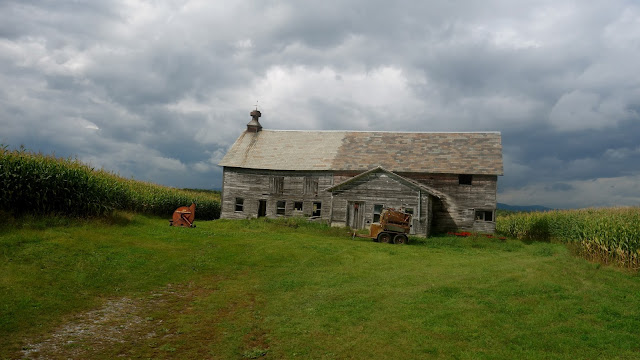 A few weeks ago I was browsing the Skidmore Events Calendar looking for upcoming lectures or exhibitions. An upcoming screening of the documentary film “Forgotten Farms” at the Gannett Auditorium caught my attention. I’ve spent the last several years of my life paying close attention to those little taps on the shoulder. Stumbling upon this film is a perfect example of why I don’t ignore them.

Being the spouse of a Skidmore College employee entitles me to a Skidmore ID along with an endless list of opportunities that I enjoy taking advantage of. I’m grateful to Skidmore for those opportunities. I’m also impressed by the fervor in which they encourage the general public to participate. Providing a venue for the screening of the film “Forgotten Farms” is but one small example.

This is a multipurpose piece. First I would like to publicly thank all those responsible for making the screening possible. Skidmore provided the venue. The screening itself was sponsored by Cornell Cooperative Extension, Saratoga County and its membership. Secondly, I want to thank the film’s director Dave Simonds and producer Sarah Gardner for making such a beautiful and eye opening gem. Thirdly, I want to encourage others to seek out the next screening so that you might enjoy the film as much as I did. Bring an open mind—leave with a renewed view of your food, milk, and dairy farming neighbors. I’ve enjoyed food, chugged my share of milk, and admired dairy farmers all my life. This film didn’t change my opinion—it sure did reinforce it.

Rather than focus on the struggles dairy farmers face, I want to emphasize the need for the general public to support and encourage their survival. I’ve lived my life on the fringes of dairy farms. I spent the very best years of my youth in the early 60’s making hay bale forts in the haymow of Brookside Dairy in Greenfield Center. As a child you only absorb the fun that exists on a working farm. You recall sitting in the shade of a large maple at the farms entrance sharing lunch with the men who’d already been up for hours milking. You got to ride through the fields on the hay wagon, oblivious to the work that went into getting the hay from seed to bale. You ran free like a farm dog from one adventure to another never understanding the complexity and sacrifice going on behind the scenes. Not until I’d logged ten or fifteen years working in a milk processing plant, peddling milk, and raising a family did I truly understand a 24/7/365 working lifestyle. You mature quickly when the fuel bill comes in your name and the winter temperatures freeze the half gallons of milk on your truck. When I look back at my work life it pales in comparison to that of a dairy farmer. Most of my work life I had health insurance and a retirement plan. Even during the ten years I owned my own business I always seemed to have enough money to do the things I did find time for. Being a dairy farmer is another story. Every acre comes with a sore back, little free time, and no instructions. The film “Forgotten Farms” spells out the challenges of today’s milk producers in a way that emphasizes their pride and love of doing something they can’t always explain. I see it as a ground level embrace of independence. The difficulty lies in their lack of control of the world outside the stone-walled boundaries of their farms. They are at the mercy of consumers and corporate America. Watching this film acknowledged and highlighted the lessons I’ve learned in the last several years in my job which falls dead square between the two. It is an interesting place to make a living between the farmer and the place that picks up their milk and puts it on the counter for the consumer. My chest carries the logo of my employer but my boots and responsibilities carry the soil of the farm as well. I’m fortunate to be able to enjoy the best of both worlds without carrying the burden that comes at the tips of either end.

In a world where compromise is finding it a tough go, the dairy farmer has little choice but to bend until he breaks. They must continually reassess, readjust, and react to the problems everyone else has created. As I witnessed the integrity and resolve the farmers in the film displayed, my mind kept looping round and round in search of some light at the end of the tunnel. One thought kept flashing through my head.

“We have to find a way to make a glass of cold milk cool again.” - John Greenwood

Like vinyl records and Sinatra, some things simply can’t be replaced.

As I watched this wonderful documentary I was saddened by the lighter than expected crowd. It’s not surprising that dairy farms are forgotten. Today’s fluid interests lie in microbrews and wineries. The internet is bloated with negative press about diary products yet our children are guzzling caffeine and sugar laced energy drinks at an alarming rate. This isn’t a nostalgic whine about trying to turn back the clock to the good old days, it’s about common sense, good health, and our future.
We need to look out for our farming friends. We will someday realize that no theme park can replace the sights, sounds and smells of a working farm. Driving by a freshly mown hayfield in late June and I’m instantly transported back in time. Back to a time when wading in a cold farm creek soothed you like a mother wiping your brow with a cool washcloth. I’m certain the first view I have if I’m lucky enough to travel north when I leave this crazy planet will be a green pasture surrounded by a moss covered stonewall, blanketed with a blue sky, and brimming with a herd of Holsteins grazing in the shade of a giant maple.

I always carry a notebook and pen when I attend a lecture or presentation. Many times I use the notes to write a piece like the one you're reading here. As this film unfolded my pen never stopped. I jotted everything that stood out or spoke to me. When I began to compile my thoughts I noticed a distinct pattern.

Here are several of my notes just as I as wrote them down.

The pattern I gleaned from watching Forgotten Farms and reading my notes is this; dairy farmers are the most dedicated, committed, knowledgeable, and hard working people on the planet. I’ve always known this to be true, but after watching this film and adding it to my 60 plus years of quiet observation it became abundantly clear. As the film came to an end the crowd remained politely quiet. I however stood up and clapped as loudly as I could. It was my private standing ovation. Yes, it was for the beautifully crafted documentary but it was also for my personal admiration of the work ethic and pride that goes into every delicious cold glass of milk I drink. Since 1974 I’ve fed my family, and paid my mortgage and car payments by picking up, processing, and delivering milk. Add to that the fact that milk is my favorite farm product and you’ve got yourself a real live milkman and dairy farm advocate.

I hope everyone who reads this gets an opportunity to watch this film. I provided links to the Forgotten Farms website. In searching their site I found they provided dozens of links to other dairy and farm related sites.

Bravo, Dave Simonds and Sarah Gardner! You should be very proud of this film.

"All my friends say, You should retire and do something you enjoy.
Well I guess I've been retired my whole life." - Dairy farmer

“There are three people that know how the cost of milk is calculated.
Two are dead and one doesn’t remember.”

Posted by Raining Iguanas at 10:37 PM No comments: