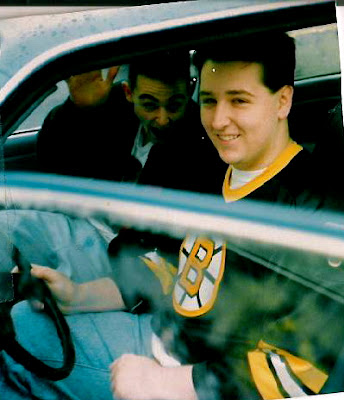 It was Christmas Eve 1994, I was in the dining room helping my wife with some last minute wrapping. The phone rang. When you have two teenage boys you hate a ringing phone and the sound of sirens. Your senses are tuned to problems with boys anyway, but when they have their own cars and a license to drive them, you're more skittish than a bachelor at his twin sister's wedding.

If you have a teenager whose car cost less than a new sofa you will surely hear, "my car broke down", on a weekly basis.

I remember this night well. It was as crummy a Christmas Eve as you could imagine. It was a cold, wet night. You know, one of those nights where the dampness soaks into your skin like hot grease up a cheap paper towel. One of those dark dreary nights you'd pay a weeks salary for if you could just sprawl out on the couch with an out-of-order phone, a mug of hot something, and a thirty pound couch blanket. This was not the, Night Before Christmas story, I had in mind. If a young family has more than two cars in the driveway, and the driver of at least one of them only works a dozen hours a week making pizza, you can not afford tow trucks AND repairs. So, in the best father-of-a-teen voice I could muster I replied, "Sit still, I'll be right there. We'll tow it home."

Well Operation Redneck Towing was going to be a blast. He wasn't around the corner at his friends house. No, he was fifteen miles away in a mall parking lot, one county north. Saddle up Duke, this was going to be a ride. I had recently purchased a redneck necessity; a tow strap. It was a thick yellow beauty. It had large heavy clasps on each end. It was about 18 feet long. That may sound like a lot, but I can assure you it is about half as long as you would like it to be.

Car towing with a strap, rope, or chain is an art. It is not for the squeamish. In fact with the cars today it is almost impossible. Locking steering wheels and brake systems have made the days of Redneck Towing almost extinct. It is also very, very dangerous. But it was Christmas Eve, and I had two teenage boys eating from my refrigerator. I could not afford AAA.  The repair would probably take us into the New Year anyway. We would have to risk life and limb. It was the only choice we had.

I was not a totally irresponsible parent, I would drive the car being towed. It was the responsible thing to do. Towing vehicles with an eighteen foot strap requires precision teamwork. The  tow'er and the tow'ee must work in perfect harmony or bumpers will be bumped. The main requirement is to keep the strap, rope, or chain taught. If you want a NASCAR experience, have someone tow you at 45 mph. You  will have more respect for the Jimmy Johnson's of the world.

The biggest problem on this night was the weather. It was snowing that wet sloppy snow that isn't really snow it's simply rain with texture. In addition, because the car didn't run, I had no wipers. So picture this circus act. I am in a car being towed by his teenage son, going 45 mph, with twelve feet between us, no wipers, zero visibility, zero brains, bellowing Christmas songs for fifteen miles to smother my fear. It is by far my most unforgettable Christmas Eve memory. It gives me nightmares and nostalgic-fuzzies all at the same time. Happy Holiday's everyone. May your teens be grown and your AAA be current.


This post was the result of a writing prompt on a member of my Hubbard Hall Writing Group's, Pugs and Pics web page.

Write and share a holiday memory
Posted by Raining Iguanas at 11:12 AM