"Hey! Slow Down."
By John R. Greenwood
Not that the calendar would listen even if it heard me, but if it would just slow down a little bit and go at my pace, I would really appreciate it. On this momentous day of 12.12.12., I happened to be down in my cellar where I pretend to stay fit by working out a few mornings a week. My mind was wandering as it does quite often and I realized what day it was. I looked over to the back of Gym Dungeon and noticed an old Thomas Oil Calendar. I thought it might be fun to use it as a blog post saluting this once in a life time calendar date. To my surprise it happened to be a December calendar. In fact it was December 1967. My mind took off in flight again. I was 12 years old on December 12, 1967. Whoa, call TAPS. This was getting freaky--not really, just a fun coincidence. But it did sort of stop me in my tracks. These months are flying off the wall like days, the days like seconds. I have way too much left to do. I want more months on this calendar. Can't we come up with a 13, 14, and 15? How about a Lovember, Fishober, and a Baconary? Something to really look forward to. 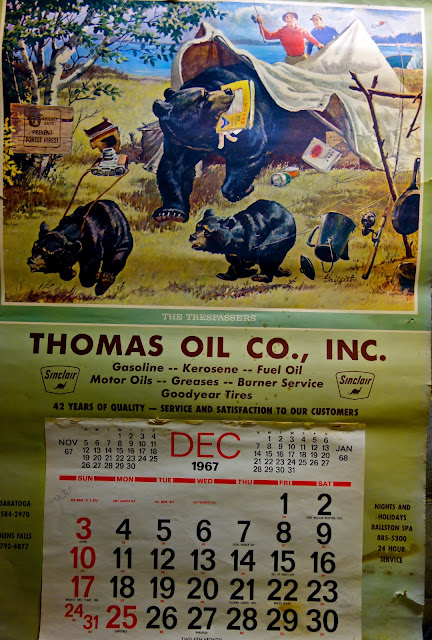 It's not growing older that bothers me, I'm over that. I tried to slow that clock down once by trying to smother the grey hair with Just For Men.  I ended up looking like Lucy Riccardo and had fifty truck drivers calling me Big Red. That ended that flight from reality. I embrace my age (not really) with open arms, I simply want a guarantee I will get to everything I want to get to. Raining Iguanas has been a Fountain Of Youth pill for me. It has given me a place to express anything I want to express. It doesn't care what I look like or whether my shoes are tied. I can simply run with the ball until I run out of steam. After all, isn't that what we all want. Money doesn't make happiness. It can help facilitate certain things. If it weren't for this wonderful computer Mrs. G. blessed me with I certainly would not be enjoying my life in cyberspace as much as I do. I guess slowing down the calendar is probably not going to happen in my lifetime but it did get the grey matter under the grey that doesn't matter moving. And that is the point I wanted to  leave you with. It is fun to look back. If you have been here before you know I lean a little nostalgic, but that isn't where life is going on. It's going on outside the picture window and it's not waiting for anyone. If you have something to say, you better say it. If you have a desire to see the Grand Canyon you better hurry it won't be there much longer (actually it will be there for a really long time I just wanted to see if you were paying attention). There is a lot to do out there. So grab your camera like the bear cub in the picture and take off in some direction just like he is here. Just don't knock over the coffee pot on your way out.

See you on Friday the Thirteenth!
In the month of Baconary


Posted by Raining Iguanas at 8:01 AM