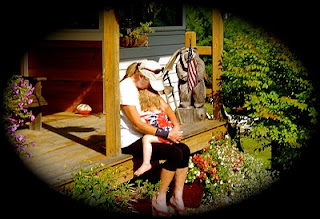 Reunion of well-grown children grey, stiff and smiling still, all with visions and voices hovering slightly beneath the surface. All wishing you could recreate the youthful joy that slipped by while you looked away, but for a minute. Hold it close. Hug it tight to your heart. Rest it softly on your shoulder. Close your eyes tight and see it clearly. Apron draped grandmother, deep-whiskered grandpa, consoling mom, protective father, gentle aunt, red-haired cousin, all circled close under smiling skies of cloud and blue. Families drawn together, decades faded between. Tiny diapered cherubs play happily not knowing they are next in line. Next in line to skip past memories and miles, unaware of the hours as they rush by, quickly, oh so quickly.

This piece was assembled a few hours after returning home from a small but significant family gathering of Joseph and Johanna Kubish family descendants. The reunion was hosted by my cousin Nancy Cahill at her warm and inviting home in Argyle N.Y. The photo above is of my cousin Pam and a cherub with a battery in need of recharging.

Golf Balls
By John R Greenwood
The year was 1970, it was a Saturday night, add six teenage boys, trouble is brewing…
It was a great job for teenage boys; inserting glossy supermarket supplements into the Sunday edition of the Saratogian newspaper. Inserting was not only a paycheck, it was also an excuse to get out of the house every Saturday night and not have to account for your whereabouts until 7:00 am Sunday morning. Every weekend we had a perfect built-in excuse and we drew a paycheck too. Brilliant!

There is a book full of stories attached to those Saturday nights, but one story stands out above the rest.

As young boys are prone to do, we were always looking for that next adventure. The newest of them was a sport for the wealthy; golf. We were not wealthy teenagers, nor were we teenagers with wealthy relatives. After all, we were inserting newspapers for a living. To play this sport called golf we would sneak onto the local Saratoga Spa “Par 29” course. If we timed it right, we could slink on after closing and squeeze in nine holes before dark.

Sharing one set of old warped clubs was a given, but we needed a steady supply of golf balls. Golf balls were expensive. Why should we buy them when there was a murky-bottomed water hazard coated with golf balls just waiting to be harvested?

So after spending the night filling the newspaper with ads of low-price promises, we began our quest for free golf balls. More golf balls than six teenage boys could ever hope to use on a Par 29 course in a lifetime. We all had swimsuits under our Levis that night. The rest is, as they say, history.

At 4:00 am, when all the papers had been inserted, bundled, and delivered, we headed for the golf course. We parked the car in an empty restaurant parking lot near the golf course. Everything was going like clockwork. There we were, six teenage boys, with our Levis pulled down around our ankles, when it all went awry.

Entering that very same parking lot was a local, (black & white) with two sleepy eyed third shift police officers on the tail end of their Sunday morning patrol. The next thing you know there was a spotlight streaming in the foggy windows of that light blue Plymouth Duster. I am quite certain those two city patrolmen never expected to see six partially clothed teenagers crouched over, quivering in fear. “What the hell are you boys doing?” are heart-stopping words no teenage boy ever wants to hear. Especially, when he’s in a compact car packed with five of his friends, and he has his Levi’s wrapped around his ankles.

To this day, I am unsure of how we wrangled our way out of that teenage boy nightmare. Was it because the policemen couldn’t stop laughing long enough to write a report? Did they recognize that in about thirty seconds they would be witness to six teen boys crying like four year-olds who just lost their mother in the mall? Or, did they simply remember being that age once?
Whatever the reason was, I was very glad we didn’t have to explain it to our parents on that scary Sunday morning.

Prologue:
Teenage boys have short memories and more guts than brains. Two weeks later we not only collected four galvanized pails full of muddy golf balls, we also had a shiny new red and black golf ball washer hidden in the back corner of the yard.

There are warm, fresh baked cookie memories and then there are truly precious teenage boy memories.
J.R.G.8.18.2010
Posted by Raining Iguanas at 9:16 PM No comments: 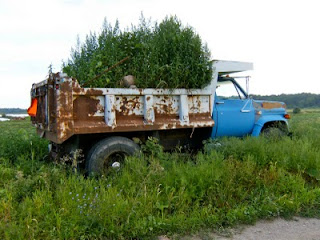 Out to Pasture
By John R. Greenwood
With head held high
On a back road dusty
He came to rest
Tired and rusty
They parked him in a pasture
Stripped the plates for DMV
Patted his hood for old-time sake
Then took away his key
An old Chevy dump truck
Like a ship adrift at sea
Gave it all he had to give
Then winked an eye at me
J.R.G.8.14.2010

My submission for Poets United Poetry Pantry #68
Posted by Raining Iguanas at 7:51 AM 10 comments: 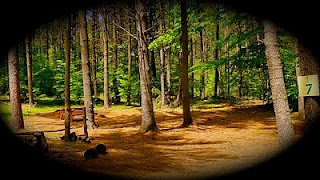 Melting into pools of

Both yellow and orange

As if returning home

Posted by Raining Iguanas at 8:08 PM No comments: