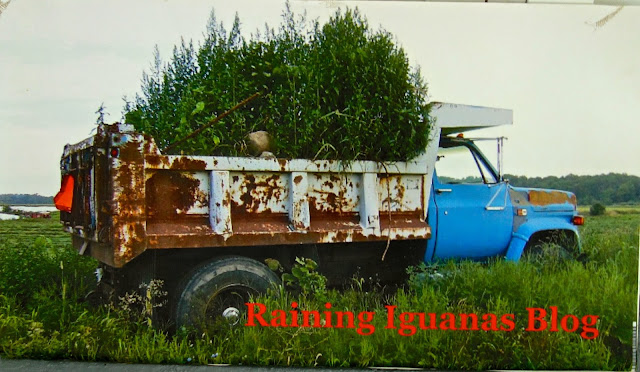 I thought about calling this piece, "The Summer That Wasn't." I didn't throw out a fishing line or paddle a canoe. I didn't hike around a lake or even the block. The closest I came to a camping trip was the Coleman pop-up my son parked in the yard while he was moving. I didn't spend a nickel at SPAC or a dime at the county fair. You hope your summer is a thrill ride, instead it felt like a nap.


My wife and I spent most of our free time working around the house. We started the summer by  repainting the shutters and window frames. I tackled one of those 20 year old, "Some Day" projects by adding rain gutters to the back of the house. We installed sections of fresh white fencing in the backyard and repainted the "cow". The impatiens and geraniums never looked better and the early summer rains kept the lawnmower busy. I replaced the back door. The new one works so well I don't have to use my knee to open it. I tamed all the hedges and shrubs with heavy duty haircuts that were long overdue.

I feel I accomplished something this summer without writing or tiring out my camera. And even though that made me a little grumpy and unsettled, I ended the summer feeling good about it.

The best thing about this summer happened while I was working. That "Summer Reunion" in the title came about unexpectedly. It happened a few miles north of Lowville, New York on the Tug Hill Plateau. I was headed to Watertown on business. I would be spending a couple of days on the road with my delivery drivers. I left my office around noon for the 3.5 hour drive up there. I always savor the miles between Lowville and Copenhagen. It's beautiful farm country and it's also where I first met an old Chevy dump truck back in 2009. The blue rusty dump truck that caught my attention when I first saw it parked in a field alongside the road. It looked like it had been left for dead. The dump box was piled high with dirt. The truck had been sitting there for so long, tree-like weeds had sprouted making it look like a gigantic Chia Pet. It was "truck-love" at first sight." After passing by it that day back in 2009 I decided to stop and take a picture. It would become one of my favorites. It was also the photo I put on a business card and identified this blog with.


The attraction for me was two-fold; one was the visual draw. The mix of color, rust, and plant material was pleasing to me. The other was a themed based. I'm no kid. I'm approaching an age where people ask me when I'm going to retire more than they ask me for the time. Let's just say I'm feeling nudged. That nudging was fairly new to me when I first saw that old Chevy left for dead at the edge of a corn field. Call it assimilation. I identified with an old broken down truck who'd spent years earning a living with his back. When it became tired and couldn't finish that last load they just simply pulled the keys and left him sitting there in the hot sun. After taking that picture that day back in 2009, I gave the old guy a pat on the hood and headed home.

On my next trip the following spring the truck had disappeared. It was nowhere to be found. I'd slow to a dangerous crawl on busy Route #12 looking in fields and along stone walls for my old friend. I had this horrible feeling of loss and emptiness. My mind wandered. I imagined the owner watching me from across the field the day I took the picture and maybe thinking I was a member of the Zoning Board preparing to file a complaint. My chest ached. Had my attraction to a rusty dump truck led to its demise. I spent the next several years feeling like I ratted on a friend. All I had left was photo and the memory. The best I could do was to honor the Chevy's memory with this poem I wrote back then.


It's now the summer of 2015 and I'm headed back to Watertown. I got an early start so I had the opportunity to take a closer look for my old friend. Something kept telling me they'd towed him out behind an old barn or into the woods somewhere. As I approached the spot where he'd once stood I noticed the porch of a nearby farmhouse full of people enjoying the afternoon. Without hesitation or fear of being shot I whipped into the driveway grabbed a business card with the trucks photograph and walked across the lawn. Two large German Shepherds scurried to their feet. I paused slightly but my fear was smaller than my need to know what happened. In between heartbeats I heard the words, "Don't worry, they don't bite, but they might lick you to death." How good it felt to hear those words. I introduced myself and tried to explain my abrupt visit without triggering a 911 call to the sheriff. There were half a dozen people on the porch and they all turned their chairs and focused on me.

I reached in my pocket and pulled out the business card.

I handed it to the man closest to the porch steps.

"Do you recognize this truck?"

It barely took a second for him to say, "Sure, it belongs to a farm down the road. It's probably there right now."

He passed the card down the length of the porch while I tried not to squeal and trigger that 911 call.

That simple discovery created enough joy in my heart to propel me through another year, but I still had questions.

"Can you tell me why the truck was left next to the road in the first place?"

It just so happened that the people I was talking with had been demolishing an old barn on their property and the neighboring farm was using the dump truck to help. They were clearing the lot where the old barn sat and were in the process of transporting fill when the truck got a flat tire and had to be left there. Truck tires and repairs are expensive and when it comes to the family farms of today priorities change on a daily if not hourly basis. The truck was left there for no other reason than lack of options at the time. The Chevy finally made it back to the top of the list and was brought back home to the farm down the road where it belonged. The next sentence floored me.

"They're still using it."

"What? Are you serous?

The man was as serious as a heart attack. He said the farm also sells firewood and had been delivering it with the truck all last winter. Considering how brutal the cold had been, I'm sure that truck was busy.

"Are they as friendly at that farm as you folks have been?" I asked with a smile.

"Probably friendlier" one man said with a bigger smile.

We talked for a few more minutes as I explained little about my blog and the role that old truck played in my life over the last several years. Everyone on the porch seemed happy they'd helped solve a mystery. Their smiles were undoubtedly genuine as I waved goodby and thanked them once again for their hospitality.

Regretfully, in my haste I forgot Reporter Rule #1: Get the dogs name. As a Jimmy Olsen wanna-be I need to be more thorough in writing down names, dates, and times. I plan to return with a proper thank you someday and I'll make sure I get the names of those wonderful folks on the porch whose kindness and trust made an old man very happy. The closest I got to acknowledging them was the name O'Brien carved in a wooden sign nailed on a tree out front.

I backed out on to Route #12 and headed toward the farm down the road hoping to meet an old friend. I eased into the dirt driveway next to the farmhouse. There were outbuildings of all shapes and sizes. There was an equal assortment of heavy equipment scattered amongst them. My anticipation swelled. I scanned the property like a hunter on opening day of deer season.

I should probably be a little careful poking around on private property 150 miles from home. I pulled up next to a garage that looked like it was being used to repair equipment. The side door was open. I entered slowly and heard someone under the hood of a tractor. I called out and a young man's head popped up. He looked to be in his late teens or very early twenties. He came right over and I quickly introduced myself. I was afraid when I told him my story he might call for help. The stars aligned and he never batted an eye. He smiled and said, "The trucks right over there next to the hay barn, take all the pictures you want. He turned and went right back to work on his tractor. It was like this stuff happened every day. I thanked him and walked around the corner of the building.

I saw my blue rusty friend parked there with his back to me. He couldn't see me approaching but I was sure he'd hear my pounding heart and turn around. His dump body was empty this time. He looked happy and clean. I looked him over like a mother with a newborn. He had all his tires and they seemed full and ready to roll. There were no broken lights, cracked windows, or missing doors. I grabbed my camera and turned on the image stabilization. I was so happy to find my old friend I couldn't stop shaking.

There on his bumper was something shiny.

I'll be darned if it wasn't a brand new New York State license plate. It was newer than the one on my car. I swelled with pride and relief.

The old friend I'd thought had been scrapped or buried in the woods had been brought back to life and was making his own living again. He was a proud contributor to the vitality of that farm and its owners. I felt so good I couldn't stop smiling. Suddenly I didn't feel old and insignificant anymore. My chest swelled up a little and my spirit rose with a sense of renewal. If that old Chevy still had gas in the tank and some miles left on the odometer maybe I did too. I patted my old friend on the hood for old time sake and headed back to the car. I looked around for someone to share my joy with. There wasn't a soul in sight, just me and an old Chevy dump truck-- both smiling--both relieved.

We winked at each other as I drove away.

It was a great summer after all.