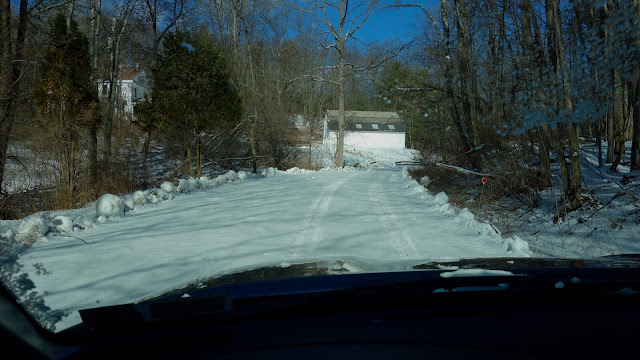 I took the photograph above as I entered the long driveway leading to my mother’s childhood home. She grew up there with her mother and father, three sisters and two brothers. It had been fifty years since I'd been there. I was around 10 when my grandfather died. The property was sold and my grandmother who moved next door to my parents passed away a short time later. The house and property were purchased by Ray and Carolyn Bouchard in the mid sixties. I didn’t know who lived in the home until several years after the Bouchard’s purchased it. Mr. Bouchard was one of my high school teachers in the early 70’s. At the time I had no idea he was raising a family in the same home where many of my fondest childhood memories were made.

With my mother having five siblings, I was fortunate to have several cousins. There were many family gatherings in the late 50’s and early 60’s at the old farm. There were lots of children with no televison, Play Station or cell phones. We spent hours playing Simon Says or Hide and Seek. Kids with skinned knees and dirty faces playing together. Imaginations running wild. Aunts and uncles laughing, telling stories, sharing food and drink, enjoying life in its simplest form. How lucky I was to have those experiences in my life. There was a huge flood of emotion as I approached my grandparents old home.

These little stories come from various connections. Today’s visit was the result of a connection made at work when a coworker asked me about a family video I had posted online. It was a video collection of photographs from my mother’s side of the family. The connection was made when she saw the photos and recognized they were taken on her in-laws property. It was an ah-ha moment when we both realized her children had many of the same fond memories growing up on their grandparents property as I did with mine. Moments later I was in possession of her father-in-laws phone number. She said,”Call him. He would love to talk to you about the farm.” A couple days later I did call and we did talk. A week later I was headed there for a visit.

There is another twist to this story. My grandparents last name was Kubish. The name of the family who originally settled the land and built the home in the 1800's was Cronkhite. Cronkhite’s were one of the first families to settle the town of Greenfield Center, NY. There are four Cronkhite homes remaining within a few miles of each other on Wilton Rd. *The stone home of Rueben Cronkhite circa 1833 is one of the oldest homes in Greenfield. The Cronkhite house the Bouchard’s live in is just east of the stone house; back at the end of the long driveway pictured in the first photo.


I remembered an old cemetery in the woods behind my grandparents house. I had a fairly good recollection of it’s approximate location. Mr. Bouchard confirmed its existence. My hope for the day was to revisit the cemetery. My grandparents weren't related to the people buried there, they were simply the landowners for the first half of the 1900's. I've lived within 5 miles of the old farm all my life. When I called the Bouchard home to see if they would mind me taking a walk in the woods behind their home Carolyn answered. She said Ray would be home shortly and I was welcome to come and walk the property. When I arrived there was only one set of car tracks in the snow so I knew Ray wasn’t back yet. I drove in to the end of the driveway parked my truck and headed into the woods. It was early afternoon, the sun was out, but it was bitter cold. The whistling wind and creaking trees added to the aura of looking for an old cemetery nestled deep in the woods. I walked slowly trying to transport myself back to the 1960’s. It wasn’t hard. The solitude soaked into my skin like a sponge. Off in the distant trees I noticed some high ground with a wall of stone around it. My pulse spiked but at the same time a calm fell over me. I was grateful for the opportunity to return here. I weaved through the crusty snow and approached the old iron gate leading into the cemetery enclosure. What a beautiful place to be laid to rest. The plot was in some disrepair but for something that had stood untouched and strong through two centuries it was in amazing shape. It was more pristine than I’d remembered. I’ve included a few photos. I’d like to have the opportunity to return some day and possibly neaten things up. It seemed like the right thing to do; not to disturb or disrupt, but to simply pay some respect to the settlers buried there. 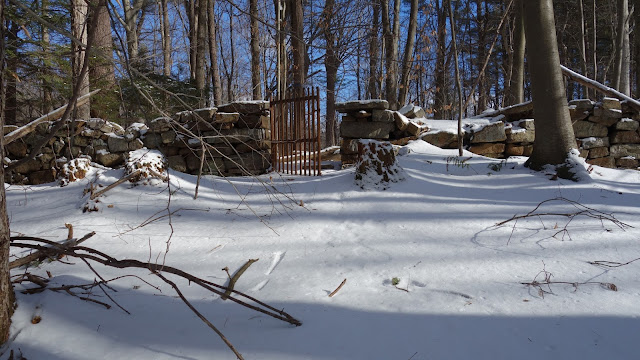 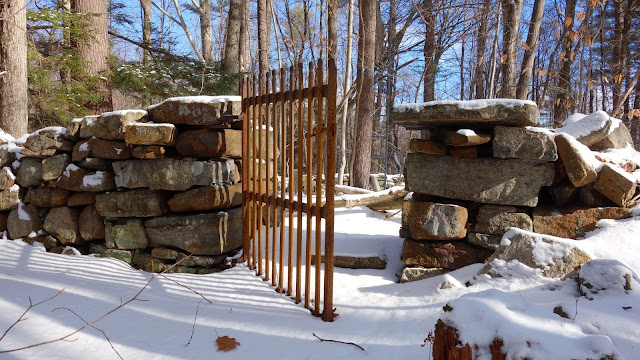 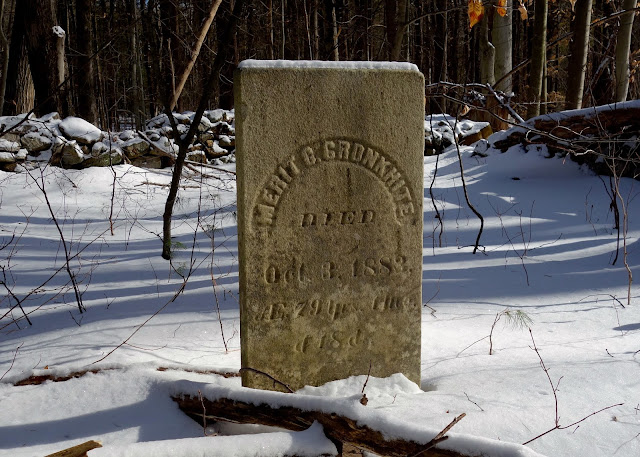 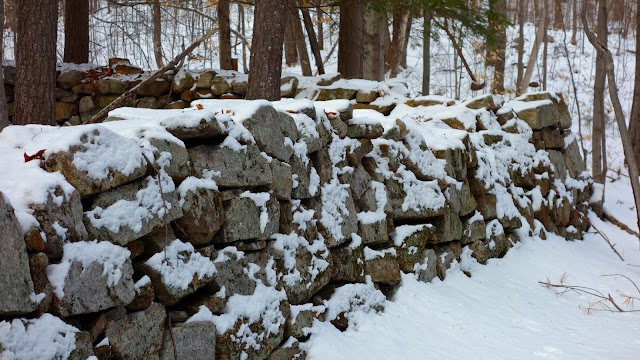 I stood looking at the land surrounding me. I tried to imagine it as the farmland it once was some 200 years ago. In my mind I removed the trees and pictured hay-filled fields encased by freshly stacked stonewalls. Without leaves, and with just a few inches of snow cover, it felt as though you could see for miles. It was a soothing feeling.

I headed back toward the house but I didn’t retrace my steps. I climbed to the top of the large hill that stretched along the backside of the old farm. The hill stood like a giant guardian protecting the house, outbuildings and garden. Dozens of children from past generations had used that hill as their playground. As I walked along the ridge of the hill and looked down on my grandparents old home I was suddenly a little boy playing army again. Memories flooded back. The hill was like a giant time machine.

The Bouchard's did a wonderful job preserving the home and several out buildings. I’m grateful for the years of hard work they’ve done there. I’m sure my grandparents would be pleased to see their home had been well cared for. I felt fortunate to be able to revisit it in person. 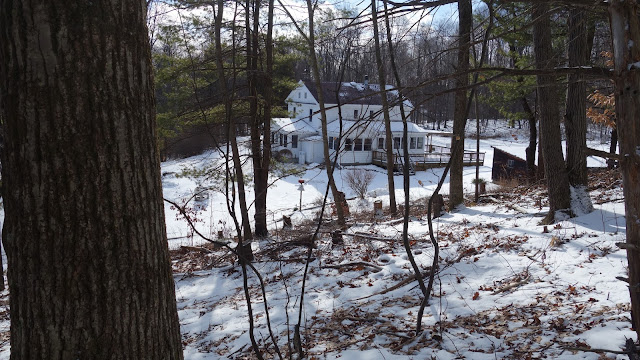 The Bouchard’s are bird lover’s. The well stocked feeders and trees filled with bluebirds, finches, and other songbirds made that abundantly clear. I felt obligated to share a less than proud story of my youth with Ray while we walked around the snow covered yard. I confessed that when I was around nine I had a BB-gun, as many kids my age did. I had it with me one day when we were visiting my grandparents. I had asked my mother and father if I could take it out in the yard. I’m sure I crossed my heart and hoped to die promising to be careful. I did the unthinkable that day. I shot an innocent bird sitting on a telephone wire. That same wire stills runs across the yard just as it did back in 1964. This time the wire's residents were safe and sound. I told Ray that the experience defined me as an adult. The sick feeling I got shooting that little bird stuck with me the rest of my life. It triggered something within me that made me a more compassionate person. One small bird gave me the gift of a lifetime. It has nothing to do with hunting. It has everything to do with not wanting to hurt anyone or anything. The yard around that home today was brimming with good karma. Somehow I felt I’d been forgiven. 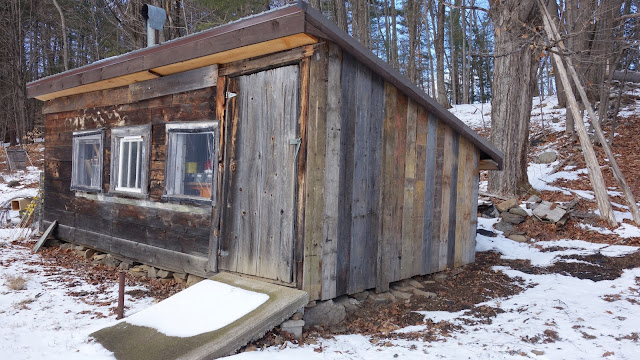 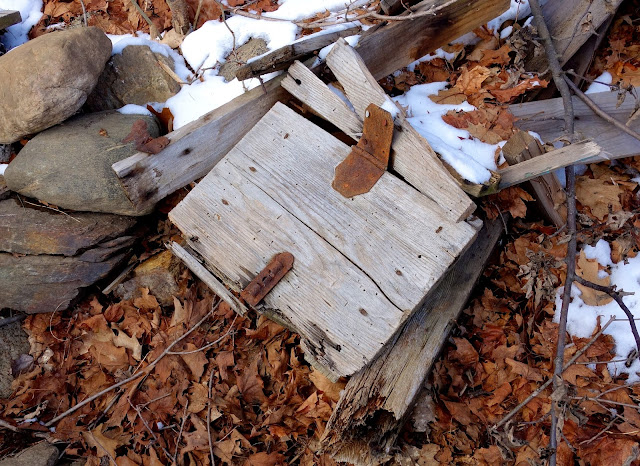 We walked around to the back of the house where some of the many outbuildings I’d remembered were still standing. There were some vacant spots but Ray had salvaged and preserved a few of the vintage sheds we used to play in as children. He’d replaced and repaired siding, roofs, and windows. The patina on them was as pure as you can get. As Ray was describing some of the past and future plans he had for some of the sheds I noticed a piece of framed lumber with hinges on it laying on some stones behind one of the buildings. I was drawn to it like a moth to a July porch light. At first glance I thought it was a part of a wheelbarrow. As I got closer I realized it was the small door with hinges on the top. I believe it was the door into the old chicken coop. I suddenly had flashbacks of crawling in and out of it. I’m sure we used the old chicken coop as a fort or playhouse and that little door was our escape hatch. I asked Ray a couple days after our visit if there was a chance I could have that simple piece of family history so I could preserve it somehow. He never balked. He sent me a message telling me he would put in a safe place until my next visit. I can’t wait.


The Bouchard’s opened their home and heart to me on that visit. They invited me inside and walked me through the home showing me the work and changes they’d made. I stood in the middle of their living room and rotated slowly like the beacon in a Maine lighthouse. I could picture everything the way it was. I could smell the wood stove and hear the pendulum clocks ticking away. Behind me the living room wall was lined with the Bouchard’s family photos. You could feel a sense of family swirling about.

The three of us gathered at the dining room table. Carolyn brought out coffee, crackers and homemade wine jelly. We sat there and recounted story after story about the experiences we’d enjoyed there. They ranged from the 1950’s to 2016. It was a wonderful visit and I’m truly thankful for the Bouchard’s daughter-in-law Rhonda for rekindling the connection between the two families.

Below are several old family photographs of mine taken in and around my grandparents home. I also included a link to the video I made that helped make my visit a reality. If you have ever have an opportunity to revisit an old family home that holds happy memories but a different family you might consider knocking on the door. You might get lucky like I did and find the caretakers of a lifetime.

This post is dedicated to the entire Bouchard Family with gratitude and appreciation.

Below is a collection of more photos from the Cronkhite/Kubish/Bouchard Farm.

* Information about the Cronkhite Houses was obtained from the book, "Greenfield Glimpses" - by Clayton H. Brown

Posted by Raining Iguanas at 8:38 AM