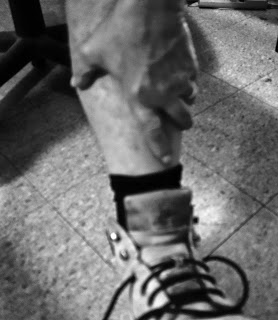 I will keep this short. I got kicked in the shin today and it hurt.

Here’s the story:
In spite of my advanced age I hold a Class A Commercial Driver’s License. I’ve had it for over twenty years. It has been a part of my life and my livelihood throughout that time. Even though I don’t drive a truck everyday to make a living my job centers around those that do. I can also find myself behind the wheel of a tractor trailer at a moments notice on any given day for any number of reasons.

As a CDL holder I am also subject to random drug and alcohol screening just like every driver under my watch.

Yesterday was my lucky day.

Until they test for Centrum Silver or caffeine I am safe as a baby. What happened when I went to take the test was the shin kicker.

The testing company comes right to our workplace. I was working on some files when my Department Head tapped me on the shoulder and said, "Come with me." When I finished filling out the necessary form I was directed into a room where a young female technician was set to test my BAC on a breathalyzer. She was about the same age as the shoes I had on. Let me add at this point that were two types of D&A tests being done that day. One is for Non-DOT (regular plant employees) and the other is for DOT (CDL Drivers).

When the young shoe-age technician looked up at me she blurted out, “You’re not a driver!?” (shin kick).

I reeled in my Mr. Sarcastic and just gave her that “Oh, you’re goin’ to the moon Alice” Ralph Kramden look anyone who’d just been shin kicked would have. Then, I took a step back, stood up tall, puffed out my chest and replied. “Yes, I’m here for a DOT random.”

I’ve been shim kicked a lot since my hairline disappeared from view and what was left turned the color of a Q-tip. I cringe when anyone under the age of thirty gives me that, ‘Look’, like I was Father Time himself. Except for Honeymooner and Centrum Silver references, I try not to talk like I’m ready for a dirt nap anytime soon. I feel good. I pass my DOT Medical Recertification with ease every two years. I take no prescription drugs (knock on wood) and I can bench press more now than I could when Nixon was president.

I’m trying not to be angry about being shin-kicked because I was a shin-kicker too. I now take them all back. I guess that’s the man’s way of telling all of us to stop and think before we pass judgment. The one you hurt may be the same one staring back at you in the mirror some morning.
Kick softly...
Posted by Raining Iguanas at 6:49 AM

Email ThisBlogThis!Share to TwitterShare to FacebookShare to Pinterest
Labels: Humor