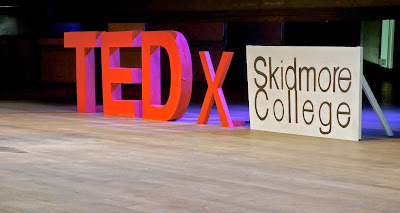 I'm not exactly sure what happened to me this evening but I'm going to try and explain it the best way I know how and thats by putting it down on paper. I just got home a little while ago from a TEDx Talk at Skidmore College's Arthur Zankel Music Center . It was a free event that I found to be a priceless experience. I found out about the talk last night only because it happened to pop up on my computer. I have been waiting for my friend, author Jon Katz’s Tedx Talk from last week in New Jersey to be posted. Because I had signed up for updates I was blessed with an unexpected gift of creativity right here in my own neighborhood. There was one problem. The tickets were all sold out. 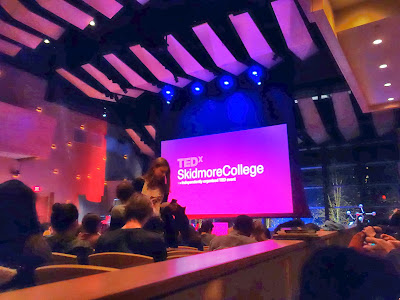 Apparently the Skidmore students take their motto of Creative Minds Matter very seriously. I was crushed. I spent the day trying to secure a ticket. I was told the tickets were beyond sold out and the kids were working it out between them as to who would get to go and who would have to wait for the next opportunity.

I am a stubborn and sometimes relentless pest. I rechecked the information on the Zankel site and read the fine print. It said that even though the seats were all gone there may be some tickets available the night of the event. That was enough daylight for me. Being a milk glass half full guy (I’m an old milkman, so using milk instead of water is the right thing to do) and having a creative sweet tooth to satisfy I saddled up the Toyota Tundra and headed for the music center.

When I arrived the lobby was swollen with throngs of youth and nose rings. I weaved my way to the ticket counter and asked to have my name added to the waiting list. I peeked at the list and saw dozens of names ahead of mine. I am not easily deterred. I am old. I have nothing to lose. I struck a claim at the nearest open wall space and leaned there confidently waiting for my lottery number to be called. When the theater doors opened and the lobby began to empty I checked my watch. Time was running out. I glanced around at the solemn faces remaining--all with tilted ear and a wishful spirit. I heard names like Libby, Kyle, Stefanie, and Marcus being called out. Just as the they were about to kick out the door stops, I heard those words I had been waiting for, “Greenwood”.

I entered the theater with my head held high and grinning from ear to ear. I called my work weary wife at home and whispered, “I’m in.” I then proceeded to enjoy the creative candy bar that my sweet tooth so desperately craved. It was a wonderful event and I enjoyed every morsel.

Now that you have the setup, here’s the main point of this post. All three speakers were wonderful and I would love to spend an hour describing each one’s message but I have a more personal observation I want to share about creativity. Its pull is not easily explained. Each one of the presenters tried to share their take on it. Everyone in that theater was there because they have some creative itch to scratch. It may be painting, story telling, sculpting, or dance. It doesn’t matter what it is, the point is don’t ignore it. That is the point I want to implant here. Creative endeavors are never fully satisfied. They only lead to the next one. The very last question of the night was asked of all three speakers, “What does being creative mean to you?” I was a millisecond from standing up and yelling out my definition. Instead I wrote it down. 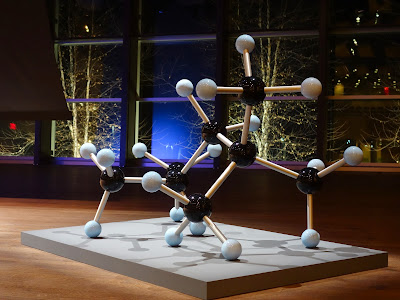 My treasure hunt began in the kerosene stove heated living room of my childhood home where I would turn a big wooden-legged red naugahyde ottoman upside down and get in it. I would pretend it was a ship and I was the Captain. My imagination fuse was lit and it has fueled me for well over five decades. I have been seeking the treasure of creativity every day of my life ever since. I have yet to find a glass big enough to quench my thirst. I lift every rock in the garden and look beneath it for that one venue or spark that fills me up. I’m guessing that will carry throughout the autumn of my life.

I wanted to walk up and down the aisles of the Zankel theater and look each and every student in that room in the eye and tell them my story. I wanted to shake them by the shoulders and scream into their faces, “Don’t stop searching!”, “Don’t settle!”, “Don’t hesitate!”.

I found what I was looking for on this creative night. I refilled the tank, and re-stoked the fire. I didn’t find the treasure but I did find another piece of the puzzle. There always seems to be a piece missing.

Isn’t that what keeps us searching?

Posted by Raining Iguanas at 7:52 PM