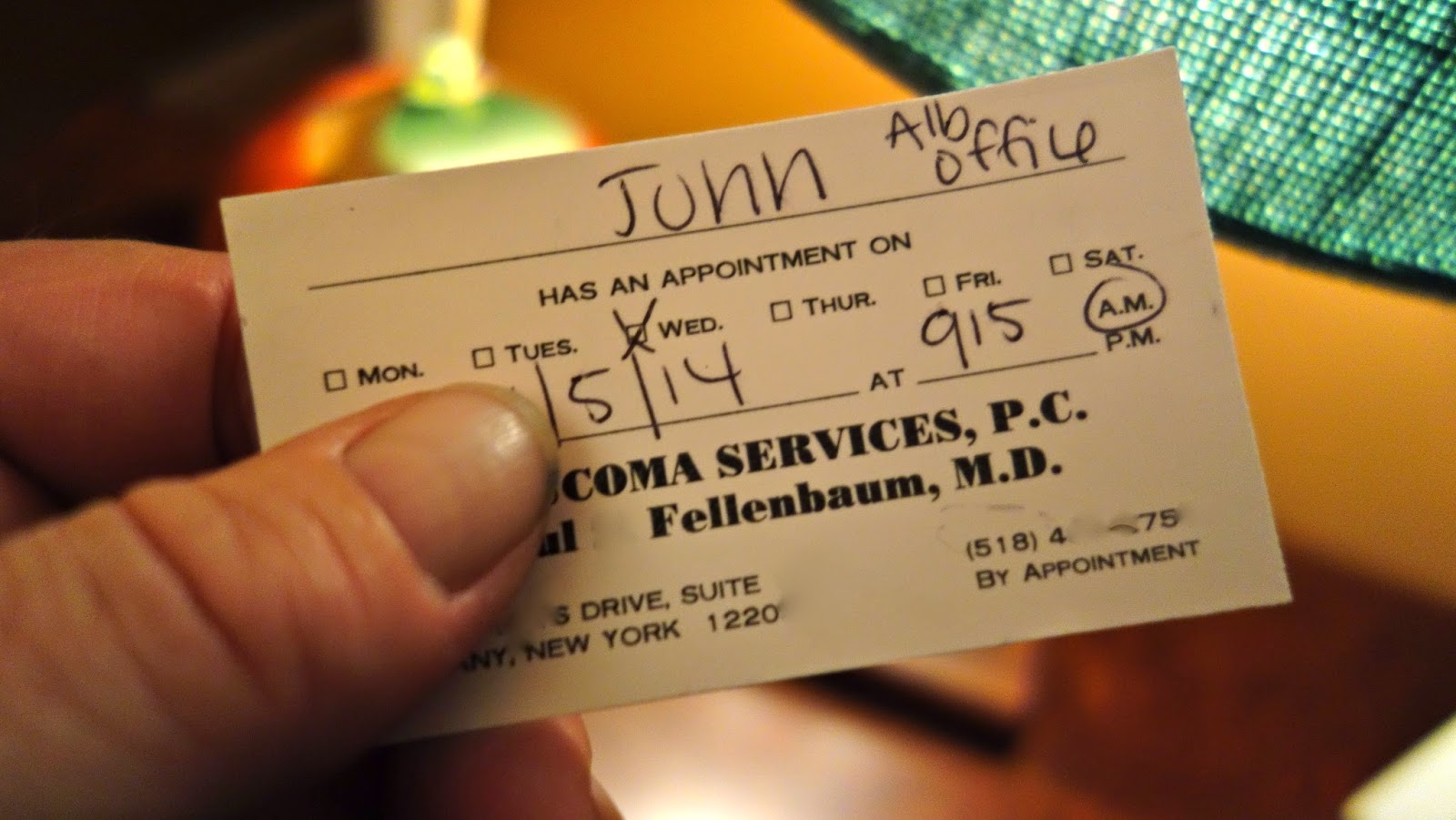 Here's the second collection of observations I've made during various doctor visits over the last few years. I started the practice back in 2011. Because quiet time has been a premium in my life I found waiting room visits provided a tiny oasis of writing time. I always bring a pad and pen. I shy away from germ soaked People Magazine and the strategically placed diabetes brochures. I found it sort of therapeutic to tune my observation skills in such a confined space.

April 2o13
We were there for an ear ache. It was an I-can't-stand-another-minute visit in hopes of some relief. Mrs G. fought off the discomfort for several days. Ear ache was winning the battle. Mrs G. doesn't like to lose fights with illness. She fights back. Today she called in the cavalry (Wilton Med) to the rescue.

It was kid day at Wilton Med. They came in crying, hopping, whining, and whispering. One was still in her soccer uniform, her hopping was not the soccer move that brought her here.

One little boy took a baseball to the eye. He was enjoying his medical adventure much more than the mother and grandmother who brought him in--just to be sure.

There was a little peapod with a cough that started from the tips of her lighted sneaks and ended at the tips of her Dora The Explorer barrettes. It was going to be a long night in her parent's house.

One family seemed to keep circling the block of exam rooms. They would go in one door, come out another. It seemed an endless journey. By the time we left, I'm certain they had logged a few miles. They may be circling yet...

Today is a new day; we are visiting the ophthalmologist. The waiting room includes a vintage collection of veterans, cranky ladies with walkers, nosey old men who have nothing else to do other than to interrogate you about your reasons for being there. There are high spots though. The accommodating Dr. Fellenbaum is a master mechanic of eyes and tuning them to work their best. He saved my fathers vision and kept it functioning at optimum level until the end. He is an unsung hero in my eyes--literally. He is quiet and soft spoken. His office is always busy and no second is squandered. He is one of my favorite men with extra letters before and after his name.

The month of May 2013 finds us in the lobby of the Saratoga Hospital for a simple blood test. It's early yet, but the meddling grandmother behind the reception desk spends the entire time on a personal call. When an actual call comes in she seems unhappy she must depart from analyzing everyone's else's business. I suppose I should refrain from judgement. She is volunteering. I am not.


One man enters the lobby and heads directly to the complimentary coffee center. He has this down pat. He must be a regular.

July 3, 2013
Two men, obviously old friends, who have me beat by at least 10 years, sit and compare notes. It goes like this for at least twenty minutes:

Vince- "Hey, how ya doin'? I haven't seen you in a while. You still live on such-and such  Street?

Dominick- "Yup, still there. The house needs some work but I need a lot more."

And so the repertoire continued its ping pong of of short question and shorter answer. There was an occasional dig at the our 44th President and our much maligned governor. The conversation was familiar and predictable. I'm sure the weather forecast found its way in there at some point too. I smiled on the inside and suddenly missed my father and his nightly news commentary. Commentary that I'm proud to say skipped at least one generation. Generally I support the president and governor whomever they might be.


September 2013
I'm in Albany for a routine eye exam.
It's a quiet office with more canes and walkers than fish in the fish tank. Comfortable shoes abound. Squeaky voices and grey haired adult children ease the concerns of their shaking parents with mouth to ear whispers. This phenomenon circles the room like a wave. My eye lids gain five pounds within minutes. My head bobs like a Chesapeake buoy in March. The next words I hear are, "Mr. Greenwood?"

September 2014
Doctor Fellenbaum - I'm back for a yearly eye exam in Albany. It's quieter than normal here today. The waiting room has one well behaved senior who appears to be waiting for another senior who may be filed away in one of the remote examination rooms. Even when the place seems empty someone inevitably appears from the shadows every few minutes. It's as if they've been in storage out back; only to be released for good behavior or to make room for the next Mr. or Mrs. Woeisme. These visits are lighter and more entertaining than the ones I experienced with dad when I was his medical transport technician. Those events were stressful and always seemed to come when I was overtired to begin with. I've become quite adept at waiting room survival techniques. I find simple ways to self entertain. My biggest challenge is not dozing off. Mrs G. finds it disturbing when she returns from her exam to find me asleep, with my head tilted back like a Popeye Pez Dispenser drooling on my shirt and snoring like a black lab next to a warm stove. I smile at her disapproval as she grabs my hand and whisks me off to the parking lot.


These observations are 99% accurate and meant to take the edge of those ever increasing waits that we seem to dread so much.
Posted by Raining Iguanas at 9:31 PM

Email ThisBlogThis!Share to TwitterShare to FacebookShare to Pinterest
Labels: Humor