I lost a dear friend today, and I'm having a hard time with it. A few days ago I was told the remaining buildings on the old Brookside Dairy property would be torn down. Praying they were mistaken, I drove by the farm on my way to a Greenfield Historical Society Event. The Brookside property had been cordoned off with caution tape and there were two demolition dumpsters sitting next to the main house. Personally, I think crime tape would have been a better choice. It was Saturday morning, and no one I spoke with knew anything about what was happening at the old farm. 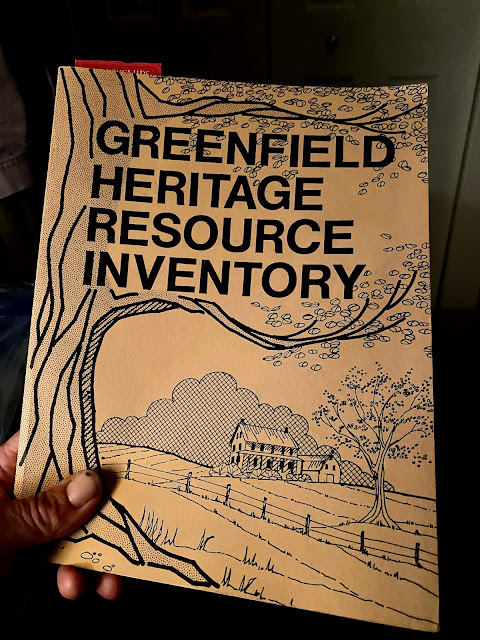 Jump ahead three days. I received a text message that Captain John St. John's 1789 home was no longer standing and that it was on its way to the landfill. Ironically, there is a drawing of that same home on the cover of a long-forgotten 1970s publication titled "Greenfield Heritage Resource Inventory." On page #3 of that Heritage Resource Inventory, under a section titled, "AN EVALUATION OF WHAT THERE IS IN THE TOWN," is the following paragraph under HISTORIC RESOURCES:

A detailed analysis of the history of the area and its architectural record is given in chapter one. Some forty structures were felt to have historical significance, and the report isolates each one, shows its importance, and urges a general program for preservation and enhancement of these areas. 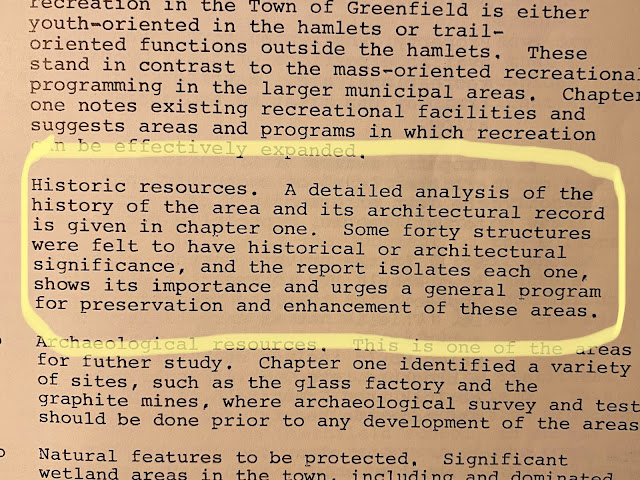 Guess which structure is now a pile of dust—yes, #9. The Captain St. John house was in the top ten!
Thank goodness they designated the Greenfield Town Hall #1.

Excuse my anger; it manifests itself when someone hurts or threatens someone close to me. Brookside Dairy was not a part of my family, but it played a significant role in who I became. Brookside Dairy taught me work ethic when I was still in single digits. It's where I learned how to build a hay fort and friendships. It set a foundation for a career in the milk business, which put a roof over my head and fed my family. It nurtured my lifelong leaning to the positive side of the road and my passion for saving and sharing stories of good times. It fueled my love of history and tightened my grip on nostalgia. Most of all, I learned the lesson of compassion. In the 1990s, Harold L. Hall shared an oral history of his life. You can find it on the Saratoga County Historical Center's website. He shared one story that stuck with me. He tells of a day in the farm's early years when he was sick with the flu and could barely move. He was in the barn milking when one of his immigrant neighbors came in the barn and saw how sick he was. He told Harold to go in the house and that he'd be right back. When he returned, he had others with him, and they proceeded to finish the milking and other chores. Harold seemed to pause in quiet reflection as he told the story.

I'm told that mold and vandalism riddled the buildings on the property and that the cost to save them would have been in the millions. That may or may not be true but what hurts the most is knowing that the people responsible will never experience the way I felt when I saw those two dumpsters.

The Greenfield Historical Society's Chatfield Museum in the Odd Fellows Hall in Middle Grove is #24 on the Heritage Resource Historic Structure List. If you see a dumpster there tomorrow, call 911. 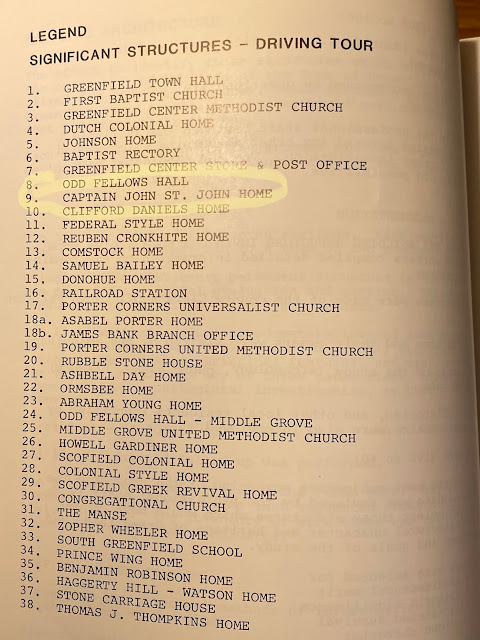 In sharp contrast, I would like to raise to hero status, those who do pay the high price of saving historic structures. One such hero is Michael Blaauboer. Michael is responsible for preserving the Brill Mansion in Wilton from the same fate as the St. John House. With the encouragement and vision of his step-mom Joanne, he took an equally deteriorating property and turned it into something Wilton residents can be very proud of. I had the same panic the day I saw dumpsters poised just outside the doors of the Brill Mansion, locally known as Pepper's Turkey Farm. My fear turned to joy when Wilton Town Historian Karen James told me the home was going to be spared. I salute you, Michael, and everyone involved in preserving the fond memories of so many. I wish you lifelong success. 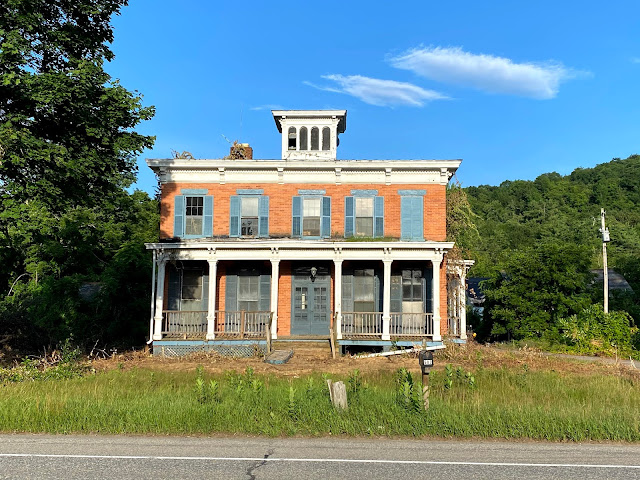 Posted by Raining Iguanas at 6:26 PM