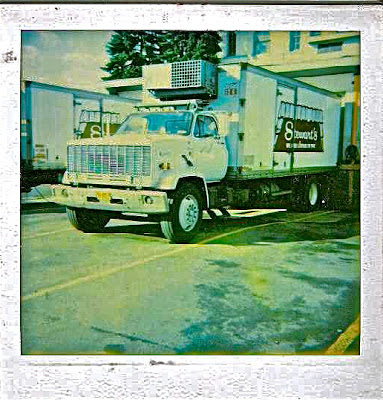 When he passed away, I penned the letter below as a memorial piece for the family and friends of Hank Helwig. Hank was one of my early mentors. I knew Hank for many years. He was a driver when I worked at the Saratoga Dairy (Stewart's). I would then see him there daily during the years I owned Price's Dairy. Years later when I returned to work for Stewart's he was the driver I would learn the most from. I brought up his name in a conversation with an old friend recently. He asked who he was. I dug out this letter and thought I would reprint it here. Since I have been posting some Saratoga history of various sorts I thought some local followers of my blog might enjoy this simple piece about one of their own.

Hank was a Saratoga original, ‘Old School’ is the term we use. It was the late 70’s and guys from the, ‘Old School’ were reaching their golden years. I was in my early twenties when I met the guys from the, ‘Old School’. Hank Helwig, Vic Price, Vinny Sarro, Nate Goldsmith, Charlie Dake, and Army Armstrong were just a few Saratoga originals that would cross my path as a young man. Hank was the youngster of that group but ‘Old School’ nonetheless.
Hank taught me to drive the ‘big trucks’. I can remember the first time I drove a split range transmission. I was coming up out of Troy on Route #7. Hank was on the passenger’s side, calm and collected as always. He was cool as a cucumber, relaxed and composed--until I had to down shift. I’m traveling 50mph pumping the clutch and I can’t do anything but grind hamburger. Will the real Hank please speak up? “What the hell are you doing? Slow down! Watch it! Pull this goddam thing over!” This lesson was over. I had to ride all the way back to Saratoga with my head down. I failed Hank’s driving lesson miserably.
Years later I would be priveliged enough to take over ‘Hank’s Route’ as it was known amongst Hank-Wannabe’s. Hank’s route was legendary. I still have the directions. There was ‘The South Troy Day’, ‘The Ravena Day’, and ‘The Kingston Day’. I was proud to take over ‘Hank’s Route’. I tried to do it the way Hank did. He took a lot of pride in his work. He was prompt, proficient, and always pleasant and cheery. Yes, it’s true Hank could be cranky on occassion, especially if he couldn’t find his hand-truck or if the milk was late. I learned over the years that just was just a cover.
Hank welcomed change like a fourth place finish at the track. I remember trying so hard to convince him to try a simple short cut that would make his route much smoother. NO WAY, NO HOW was he going to try it. It would take an Act of Congress to make Hank try something new. That’s ‘Old School’.
I learned a lot from Hank. We all did. He was a character, and in this day of homogenized, generic people we need more characters. He was missed when he came off the road, we missed him when he retired, and we miss him now.
To the Helwig family my prayer’s are with you. My thoughts and memories are with Hank, a ‘Saratoga Original’.

* A comforting side note: Hank's resting place is in the same cemetery as my parents. It is also directly across from theirs. I never visit them without stopping to say hello to Hank.
It's funny how things go sometimes...
Posted by Raining Iguanas at 10:58 AM