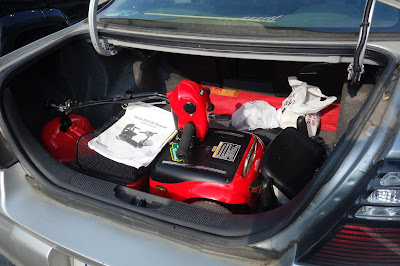 My father passed away in February of 2009. One item he left me with was a little red scooter called a Rascal. He bought it to get around his apartment building. I attempted to sell it a few times with little success. I guess I really wasn’t trying too hard. Occasionally I would put it out by the road with a handwritten For Sale sign. I never posted an ad in the paper or listed it on-line. The Rascal wasn’t a heavy duty electric chair like you see on television so the used value was limited to a few hundred dollars. I stored it in my cellar and kept the battery charged. Recently I’d been doing some thinning out and I decided it was time to find a home for the Rascal. A few days later at work I happened to be talking to a coworker about her affiliation with local VFW Post #2475 in Glens Falls, N.Y. Her name is Belinda Ellis and she devotes a large part of her spare time supporting veterans. Along with VFW Post # 2475 she is also involved with Operation Adopt a Soldier. One of her special projects is fund raising for the Global War On Terrorism Monument. The monument is being proposed for the southwest corner of Crandall Park. The monument would commemorate and honor service members of the wars in Iraq and Afghanistan. It was seconds after speaking with a impassioned volunteer and supporter of local veteran groups that I offered the Rascal to Belinda to do with what she liked. I thought the VFW Post might know of a veteran that could use the Rascal. Belinda being the ultimate fundraiser accepted and acknowledged the donation before I could say, “God Bless America.” The next morning the Rascal was being loaded in Belinda's trunk and was headed to Glens Falls VFW Post #2475. Belinda said Rascal would be put to work immediately. I know dad would approve and be thrilled to know that the Rascal would continue giving others a little more mobility and freedom. After all, freedom is what it’s all about in the first place.

Dad, the Rascal seemed happy being adopted and placed back in service. He was excited to be going to a good home. I knew that would put a smile on your face.

Here is a link to a previous post about Dad's Rascal. It tells the story about sales pitches, scooters, and a father and son relationship that got stronger at the end.  The post was called  The Day Of The Rascal.
Posted by Raining Iguanas at 11:42 AM