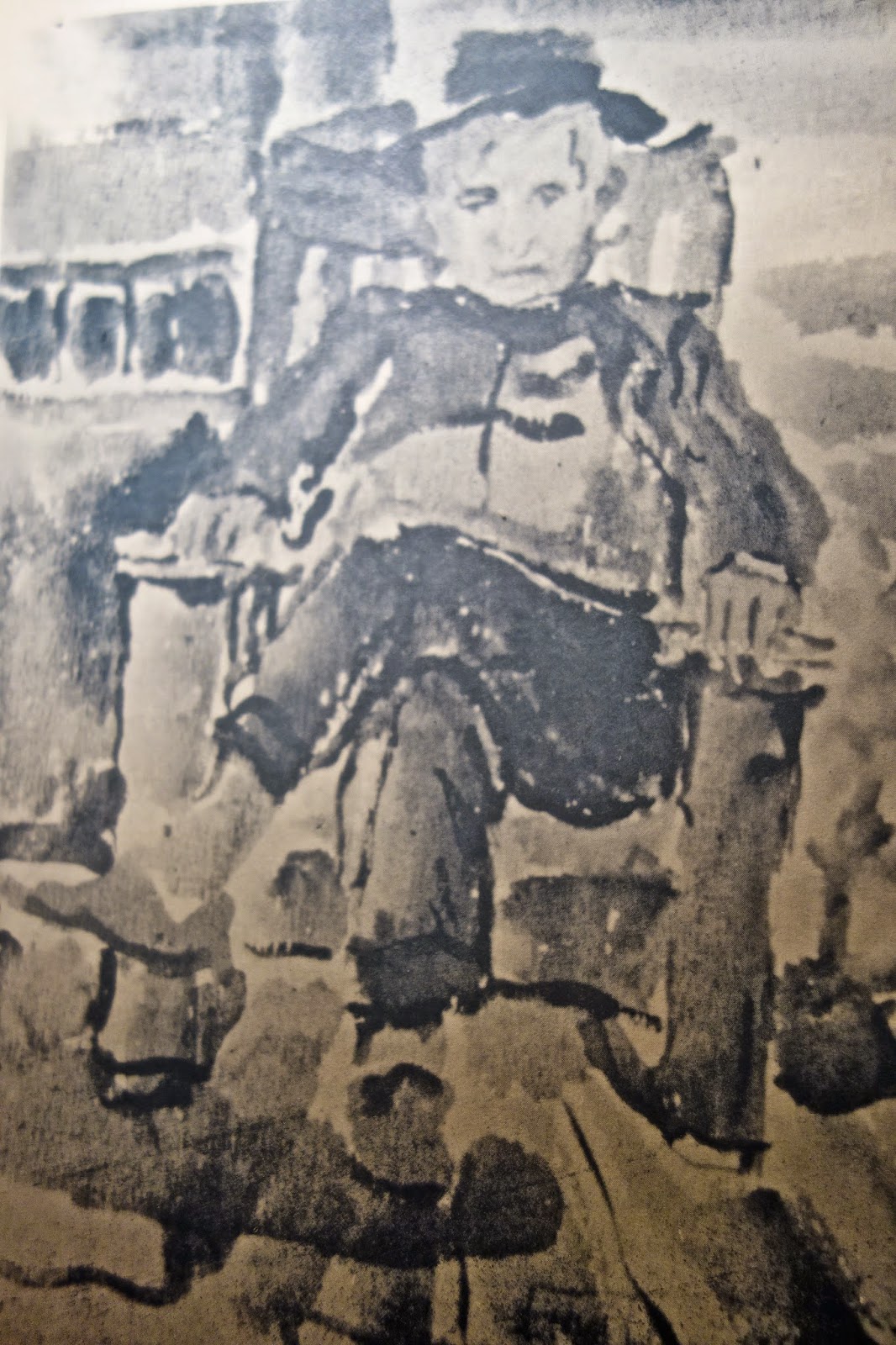 You can read Discovering Dickinson Lane Part #1: here. Part #2, “A Phone call And Crossed Fingers” will describe what happened next in my quest to positively identify a man sitting on a porch in one of Jack Lewis’s paintings. To do that I must first confirm the location of that porch. After discovering Dickinson Lane I went home and pulled up an online website that gave me more information on the 1910 farmhouse I believed to be the one on which the man he called “Uncle John,” sat while Jack painted his portrait. The next few hours after finding Dickinson Lane would prove to be the most fun a grown man could enjoy with a phone, a computer, an obituary, and a little bit of luck.

When I got home after taking my photos of the farm I found for sale, I quickly turned on my computer and Googled “Dickinson Lane Gansevoort”. Two things stood out immediately; one was a, “Sale By Owner” ad for 15 Dickinson Lane, another was a December 2013 obituary for Lawrence Clayton Dickinson Sr. I guessed that Lawrence may have been the owner of that family farm on Dickinson Lane and after his passing his heirs may have been selling it. The sense of loss I wrote about in the original post was most likely the spirit of Lawrence Dickinson hovering over the farm he loved so much. The timing and location all made sense. I wrote down some of Lawrence’s children’s names. There was a Lawrence Jr. It made sense that he might be the oldest or at least the oldest male. I set out in search of a phone number. In the obituary his address was listed as Waukesha, Wisconsin. What the heck, it was a shot. I dialed 411 in hopes of a listing. Today with cell phones and a mobile society it was a bit of a stretch. I didn’t have much luck so rather than spend my time looking for Lawrence Jr. in Wisconsin I went back to the obituary and looked for the family member who lived the closest to me. There was a Lori (Dickinson)Weaver and her husband from Greenwich, New York. I Googled Lori Weaver and after digging down a few feet I found a number. As I was dialing I looked down at my writing pad. It was the pad I had with me on my motorcycle ride. I had written down the number on the For Sale sign on the front door of the farm house. The numbers were a match! The number on the farm house was hers. After several rings a machine picked up. I left a short rambling message that I’m sure Lori found intriguing. I also left my phone number and crossed my fingers. Because she was trying to sell the farm and because my questions were about the history of the farm I was hopeful her curiosity would encourage her to return my call. I began more Googling and waited.

It was a few hours later when the phone rang. It was a friendly voice, full of intrigue as I had suspected. I can read a person quite quickly and Lori would be no exception. I knew instantly from the way she spoke that she was a kind and generous person who would understand my crazy investigation. I was spot on; we talked for over forty-five minutes. I started from the beginning when I pulled Jack’s Hudson River book from the shelf in the Lyrical Ballad Bookstore back in 2010. I explained my infatuation with a watercolor artist who painted a book full of familiar places in the early 1960‘s and all of them were waiting for me to tell their individual stories. I read passages from the book hoping she could confirm the identity of Uncle John. Because she was just a toddler at the time she could only offer some speculation.

One piece she provided did keep my hopes of having found the right home, high. I asked her if the farms now enclosed porch was ever an open porch that overlooked the river a few hundred yards below. She answered, “Yes, it was closed in several years ago. In fact there was a porch that wrapped around the other side of the house as well. The trail for Uncle John was getting warmer.

She was confused by some of the details Jack wrote about. I explained that I had found multiple discrepancies with names of people and places. I kept picturing Jack jotting down notes and scribbling names in a tattered composition book with lots of miles on it. He lacked the assistance of Google Maps and Wikipedia. It would be months after his visits when he would finally sit down and try to put his writing together with his paintings. It made perfect sense that some of the facts and names might be somewhat distorted and mixed. I was running on instinct on this one and I wasn’t about to be thrown by a “misclue”.

Here’s where this post takes another turn in the river. Lori kindly suggests that her Aunt Kathleen, Lawrence Sr.’s sister, might be able to help me. She tells me she lives in the area and would probably love to hear my story. She thinks Aunt Kathleen might even remember Jack’s visit if he did indeed visit their family farm. I told her I did not want to intrude or invade anyones privacy. That is one of my pledges in researching this book. I want it to be free of conflict. It is important for me that anyone I include is comfortable with my portrayal or interpretation. I ask Lori to contact her aunt first and explain my inquiry and if she is comfortable with it to have her call me at her convenience. She agrees, we wish each other well and hang up; I wait.

I can’t explain how something so seemingly simple can excite you but this entire journey of following the pages of a fifty year old book about the Hudson River has me held captive-- captive in a good way. At every turn I find something new that has been there all along. It’s slowing down life long enough to taste it that makes the difference. This excursion down the Hudson is something much larger that a handful of blog posts. To me it’s more about survival and a commitment to something unexplainable.

Less than an hour after speaking with Lori, my phone rings. Normally when my phone rings it sends an electric shock through me. It’s either a work related problem or someone looking for a donation or for a few minutes of my time to answer a survey. This time I was wagging my tail in hopes it was Aunt Kathleen.

“Hello, this is Kathleen Cary, Lori’s aunt. Is this the John who has a book he’s looking for information about?”

“Yes, thank you so much for calling, I have a book I think you will find interesting to hear about.”

And so another forty-five minute question and answer marathon began. For me it was like a day at Disney. Don’t laugh, that’s not a stretch, ask an archeologist who’s just dug up a thousand year old artifact how it feels to unearth a mystery. Kathleen was as pleasant and open as her niece. One thing I have found in this search is some really, really nice people. Kathleen Cary was one more on my list. I read her some things out of Jack’s book in hopes it would trigger a recollection or a confirmation. You could feel her mind backtracking fifty years with visions of different family members and friends swirling around in her head.

She said, “Uncle John huh? I’m not sure. I think it might be referring to John Bussing who was a brother-in-law. The timing is about right and he was in bad health around that time. The other parts didn’t make sense. There was a Mrs. Campbell mentioned, that doesn’t ring a bell.”

I asked her if she thought she could identify the man if she saw the painting in the book. She said if the painting was done there at that time that she was confident she could tell who it was. Of course the next question I asked her was, did she live near the old homestead and if she did would she be willing to let me bring her the book to look at. Even if she didn’t recognize the man on the porch I was sure she would enjoy thumbing through the pages of the book, especially the ones from that area. She said, no, she didn’t live up that way anymore.

She says, “The Home of the Good Shepard.”

My heart rate spikes. I know there are several Home of the Good Shepard’s in the area.

“The one in Wilton.”

I pull the phone away from my ear and look at the phone. I take a deep breath and reply, “You’re kidding.”

“Because I’m your neighbor, I live down the road. I can see the Home of the Good Shepard from my driveway!”

Now it’s not Al Capone’s vault but it’s turning out to be more exciting. I’m sure Geraldo Rivera would agree.

I said, “Kathleen we need to make a date to meet. I can’t wait to show you this book.”

Understanding that a woman living on her own in a retirement facility would be a little hesitant to meet with a man she’d only talked with for a few minutes on the phone I backed off on the throttle a little. I waited for her to digest my request for a minute. She sounded like she was in full control of her faculties and she proved it.

She said, “Well, maybe Lori would like to be here too. She’s kind of busy but I’ll ask her. maybe she’ll have a chance to come over and see it with me.”

I explained that I had the entire next week off and that I would touch base with her Monday. I needed a couple days to savor this chapter of the story anyway.

Something tells me the Dickinson Porch mystery may have a couple more chapters. Dickinson Lane may not be very long or well known but it has certainly made one afternoon motorcycle ride a most interesting one.

Posted by Raining Iguanas at 9:55 PM