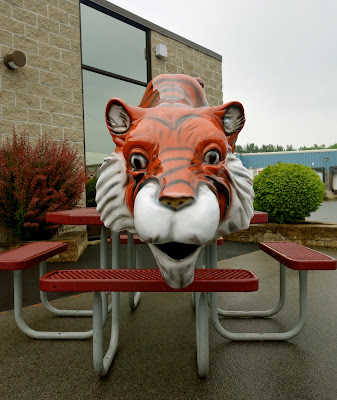 I was paged to the front desk at work this afternoon. The call said,"There is a man here who says he has something that will make your day."

When your day starts at 5am, it's a Monday in the Hauling Department, and the only thing good that happened since you got there was knowing Friday was now eight hours closer, you live to hear a sentence like that.

It was an old friend and he was grinning from ear to ear. He looked like a kid who just got a new bike for his birthday. It was one of those 'Yee Haw' looks that brings a smile to anyone watching, even if they don't know what's going on.

He kept waving to me, "Come on, come on, I have something to show you!" 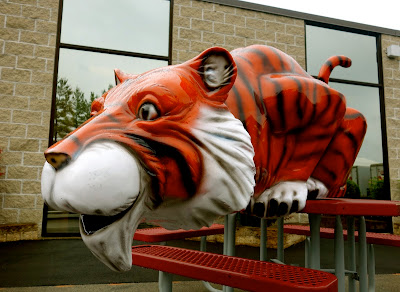 We stepped outside to his parked minivan and he pulled out his keys. He popped open the hatch in the back. There as big as life and filling the van to the brim was a tiger laying on his side. It was the most beautiful tiger you've ever seen. It was a sight to behold, not just because of it's looks, but because of the story that came with the tiger, The Esso Tiger from the 70's.

You will have to read the story which I wrote almost four years to the day to fully understand today's excitement. This was a story that took decades (plus 4yrs) to come full circle. It's the simple story of an Esso Tiger, a teenage prank taken to extremes, a couple of grey haired kids smiling from ear to ear over a fiberglass memory brought back to life. A life that for at least two men on a wet and rainy problem filled day turned happy and joyful. It is one of those cherished stories that you tell your grandkids so many times there's a good chance it will cling to a few generations beyond. 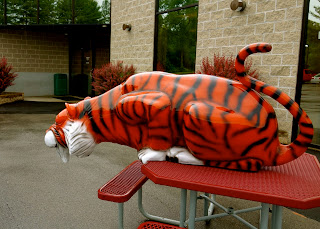 After handshakes and photographs we repacked Esso Tiger in the back of his new owner's minivan. He was headed home where he belonged and where he would start his new job as the ultimate yard ornament, whimsically entertaining anyone who would listen to his story. The roundabout story of a tiger who once was lost, and now was found.

Now here is the rest of the story: 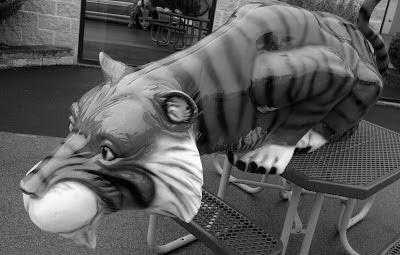 This is a true story. The names have been withheld to protect the participants. The following story is not about Tiger Woods, nor is it about Tony the Tiger. It is not about an endangered species, circus animal or, old family cat. It is about an Esso Tiger. This is the story of an Esso Tiger that disappeared from the roof of a long forgotten gas station in Saratoga Springs one moonlit summer night in the early 70’s. The story is about the Esso Tiger’s journey from that rooftop to a backyard on Northern Pines Rd. where it stood guard for 30 years.


Even with a missing tail and faded stripes, Esso Tiger never shied from his role. He protected and entertained two active boys from childhood to adulthood. Sadly, Esso Tiger’s job diminished when the boys grew up and moved away. Work was hard to find and his life became boring and dismal as he filled a corner in the tool shed. There he was propped uncomfortably on his broken tail and with his back against the wall. The Esso Tiger never lost hope that life would improve and a fresh opportunity would someday march his way.

Well, one recent summer day, as his caretaker for 30 years, I could sense the sadness in the Eye of the Tiger. He was calling for my attention. My life was at a crossroads and so it was for Esso Tiger. “Time to move on.” he seemed to whisper. And so, it was to be.

I dug the faded sentry from his cobwebbed crypt and placed him in the yard, with a sign that seemed quite sad, “FOR SALE”. I had placed Esso Tiger out there a few times before. In times of monetary greed and the EBay fueled collectable explosion, I thought Esso Tiger could be worth as much as one-thousand dollars or more. Now in hard economic times, light wallets, and $3 gas, Esso Tiger’s going price was set at fifty bucks. I was lovingly encouraged to take twenty-five if offered.
All alone, Esso Tiger sat out there through days one and two of his caretaker’s vacation. Depression and boredom were enemies creeping close and breathing heavy on his faded neck.

Then like a beacon, like an angel from above, an answer came through the gate. Not heavens gate, the gate in the arbor leading to my backyard. The angel was familiar yet not immediately recognizable. Could it be? Is it possible? Why, it sure was, it was the one responsible for sending Esso Tiger on his endless journey so long, long ago. The prankster extraordinaire with the devilish smile, and mischievous spirit, spotted Esso Tiger in the yard as he was passing by. Just as a light switched on for me when the master of mischief passed through the arbor gate, so it did for him as he drove by and saw the silent sentinel for sale in the yard. That familiar face, that memory, the laughs, the racing pulse, it all came back in a four-second-quarter-mile flash. The circle was complete. People reunited, stories retold, three ex-large personalities back on the same thirty-year-old track.

Joy comes in many forms; a new baby, a wedding vow, a winning $20 scratch-off, but this was a different joy. This was the pure joy of past meeting present and memory looking forward. Two grown men, their grown sons, a faded old tiger with a broken tail, renewed spirit and I swear, a small twinkle in his eye, refreshed and reloaded with a new story to tell.

As we lovingly placed Esso Tiger in his new caretaker’s van, the FOR SALE removed and tossed aside, a wave of happiness overcame me. This was the best start to a summer I could remember in a long, long time…

* This is a true story to the extent of this man's memory. I handed over the keys to Esso Tiger back in 2009. It was the right thing to do. His new owner had him repaired and repainted. He gave him the love and attention he so richly deserved. As this story came full circle for the second time I couldn't help but reflect back through the years and years that fiberglass animal sat patiently perched in my backyard amongst the maples. He never took but always gave. This story would never have come about had one man not passed by my yard one random day four summers ago. It is a story with a happy ending as all stories should have. It gives me joy to tell it. I hope it brought a bright spot to your day.

Posted by Raining Iguanas at 8:15 PM