The Dump Can Wait

The Dump Can Wait
By John R. Greenwood 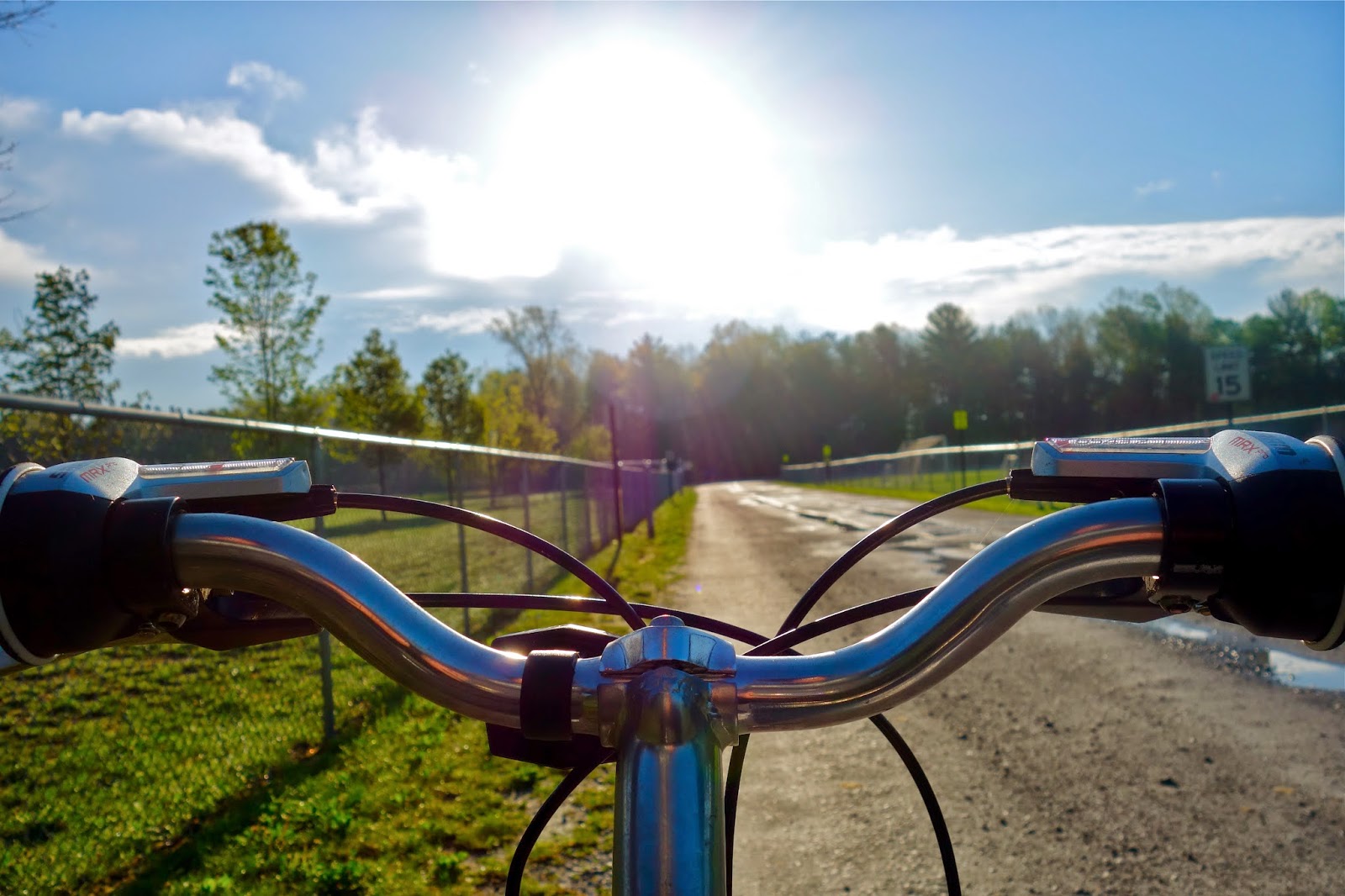 Saturday plans usually go awry and this Saturday was no exception. Minutes before turning in Friday night my wife and I talked about what we both wanted to do the next morning. My wife had visions of doing her early morning exercise routine interspersed with catching up with some things around the house. I had hopes of a run to the dump with a load of leaves and branches for the mulch pile. I also envisioned getting some other work around the house. What greeted me the next morning was a beautiful sunrise that was preceded by a night-long rain shower. Let’s just say I was being led astray. The week had been long and stressful. I needed a break more than I realized. I stood in the doorway to our room and declared, “The dump can wait. I’m going to ride my bike over to nearby Gavin Park and take a walk.” 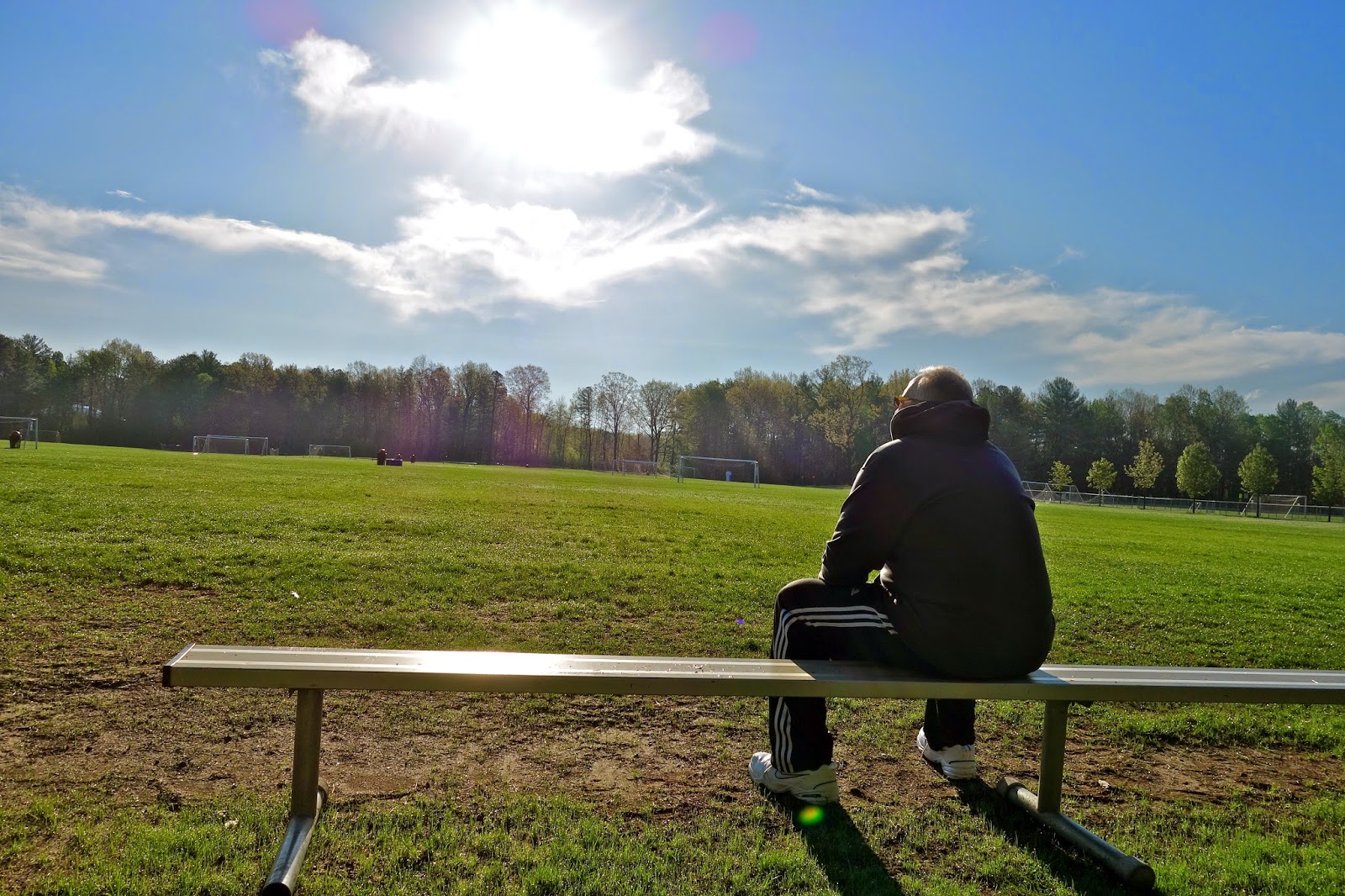 Many times I simply walk around my 1.5 mile long block but the traffic and its inhabitants can get a little sketchy. With everyone who owns a car texting each other about world events I get plenty scared. I need to hedge my bet on lasting another twenty years. If I have a choice I like walking somewhere other than the road. I figured with all the miles I’ve logged walking State and County roads in the last fifty years my luck may be wearing thin. The morning was a little brisk so I grabbed a sweatshirt and headed out the door. 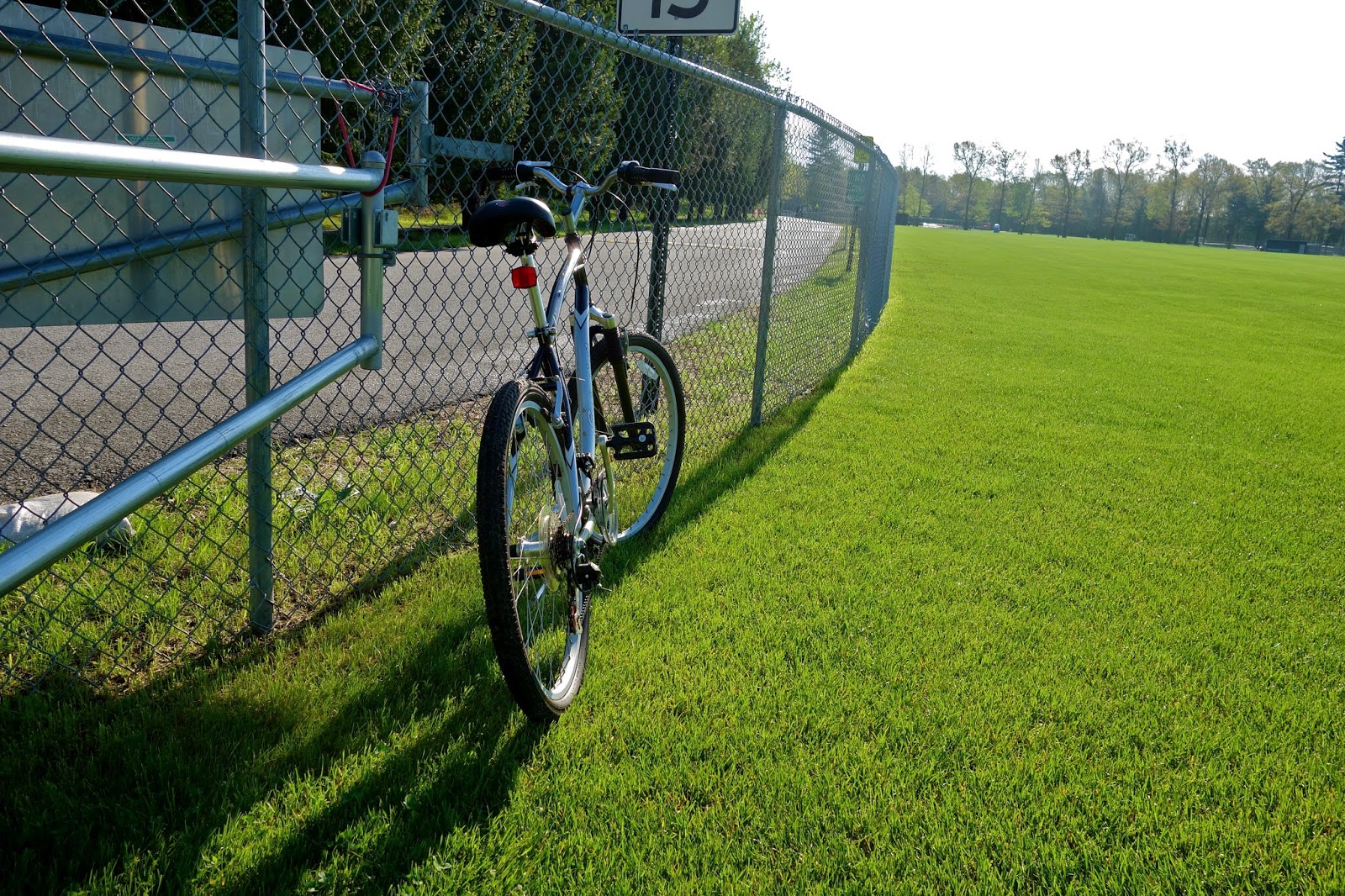 It’s a short ride from our house to Wilton’s Gavin Park. It takes about 5 minutes on the bike. It was a little past 7am and I had the place to myself. I rode around the park for a few minutes first then leaned my bike against the fence and began walking. The park has a beautifully maintained walking path around it’s perimeter. It's a mile in length and has tall white pines as an outside border. The park is huge and is chock full of baseball fields, soccer fields, tennis courts, and basketball courts. There's also a spot full of playground equipment for the little ones. It's a place any town would be proud of. Being able to enjoy it on an invigorating Saturday morning was just what the doctor ordered. 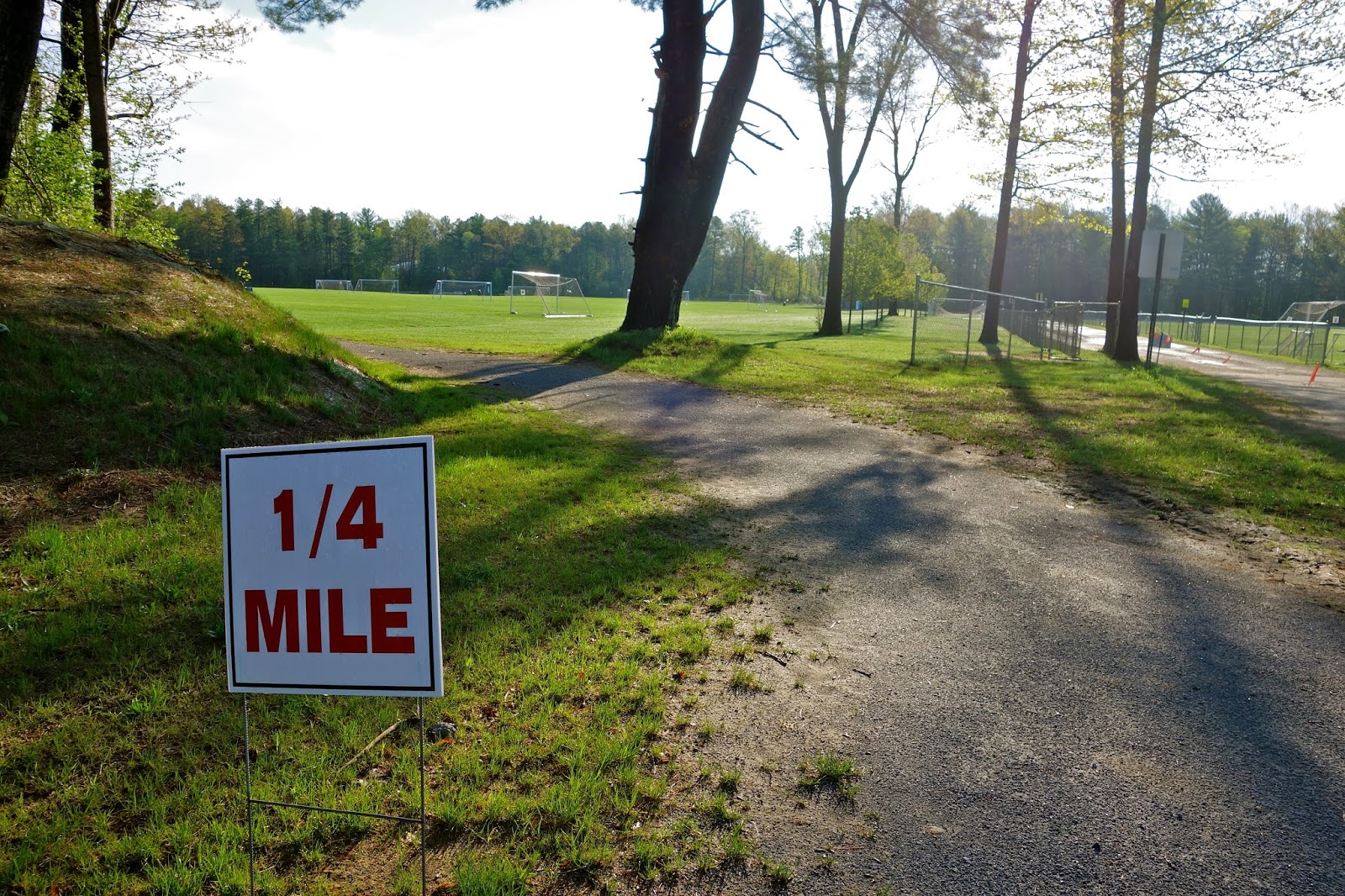 I always come out of the winter doldrums in high gear, searching for that next adventure that will spur a story or interest. I was about to catch one like a catcher snatching a high and outside fastball. I had to pay attention or I might miss what was headed my way.

I finished my walk. I had to get back home. There were a lot of things I needed to get done today. As I was getting to the end of the street that leads into the park I saw a Garage Sale sign. It wasn’t just any garage sale sign it was a Garage Sale / Art Show sign. How often do you run across one of those on your morning bike ride?

Now hang in here with me. There is a little more twist to the tale. As I approach the home I see a man and his son bringing more items out to the tables set up in the middle of the front yard. There in the middle was a box of books and some additional home goods. It was only 8:15 and the sale didn't start until 9am. I was curious but I didn't want to impose by asking questions about the art work. I simply said good morning as I was riding by and continued on my way.

It was a short way.

I turned around and went back. My curiosity got the best of me. You put Art Show on a sign and books on a table, I'm going to ask at least a pint full of questions.

"They're photographs." The father said. 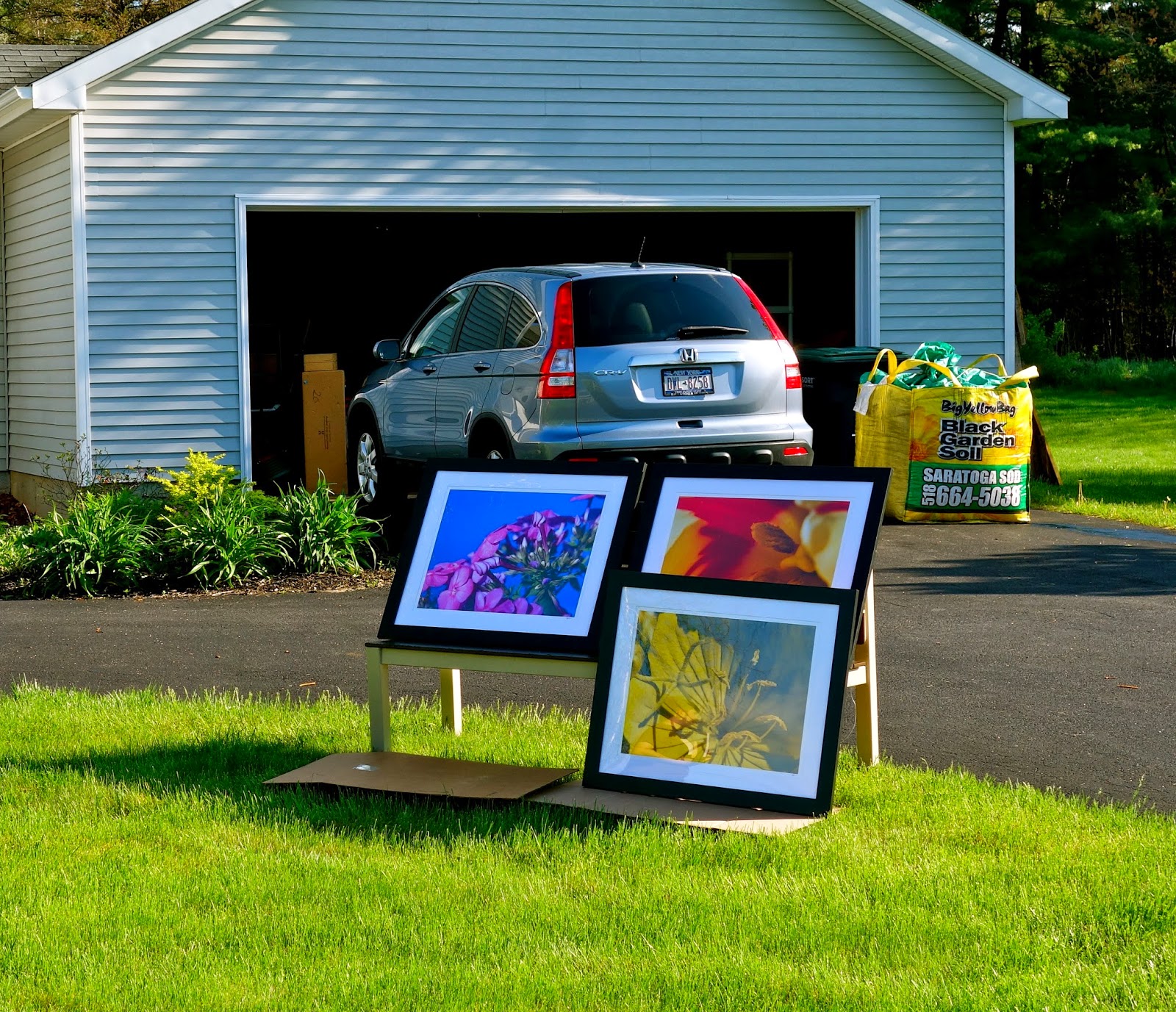 He explained he was a professional photographer, they had just moved, and that they were thinning excess inventory. He said he would be bringing more items out and that included more books. I love looking through book collections so I told him I'd return later.

I peddled home and reenacted the story for my wife. Nothing I do surprises her anymore so she just smiled and said,"That's nice dear."

"I'm going back." I said. "I want to see if he has any old art books or other photographs."

It was now after 9am so I jumped in my pickup and off I went. Now I could fill the bed of the truck if I wanted to.

When I got back there were a few cars already lined up along the edge of lawn in front of the house. I parked and headed right to the table with the books on it. Right smack dab in the middle was a worn and faded copy of John Steinbeck's "Travels With Charley". Steinbeck was stalking me. Just a couple of weeks ago he had me in his grasp when my wife and I went to see "Of Mice and Men" at Hubbard Hall in Cambridge. I'd been doing some research on Steinbeck and had just learned the story behind "Travels with Charley". Since I whiffed on the college experience I rely heavily on Goggle and Wikipedia for all my educational needs. Another strange coincidence occurred just a few days ago. I was sorting some of my old notebooks and journals. I save everything related to my writing. Sticking out of the top of one of my journals was a small piece of paper with the words TRAVELS WITH CHARLEY written in big bold letters. Not until today did I remember writing that down and why. It was a few years ago when I met portraitist Emile Klein. We met at Salem Art Works. The meeting resulted in me writing a bio for one of his portraits on the You're US website. When he left to go back to California he suggested I read Steinbeck's book Travel's With Charley. He said the theme of my blog reminded him of the book. He was confident I would enjoy reading it because of that familiarity. I assured him I would, but I never quite got there, until today.

I can say with confidence that I will begin reading the book as soon as this piece is complete.

Every connection I make swirls me around to another. When I asked the man from the yard sale how much he wanted for the book he said fifty cents. I handed him a dollar and told him briefly about why I was so excited to have found that particular book. He smiled and said he enjoyed reading it. He was pretty sure he bought it at the Lyrical Ballad Book Store. It suddenly occurred to me that it was the Lyrical Ballad Book Store that also brought me Jack Lewis's "The Hudson River". Both books were written in the early 1960's. Both books were about traveling in and around the country they loved. Both were written by aging men looking for more out of life than sitting on the porch swing. Both stories were related in so many ways. 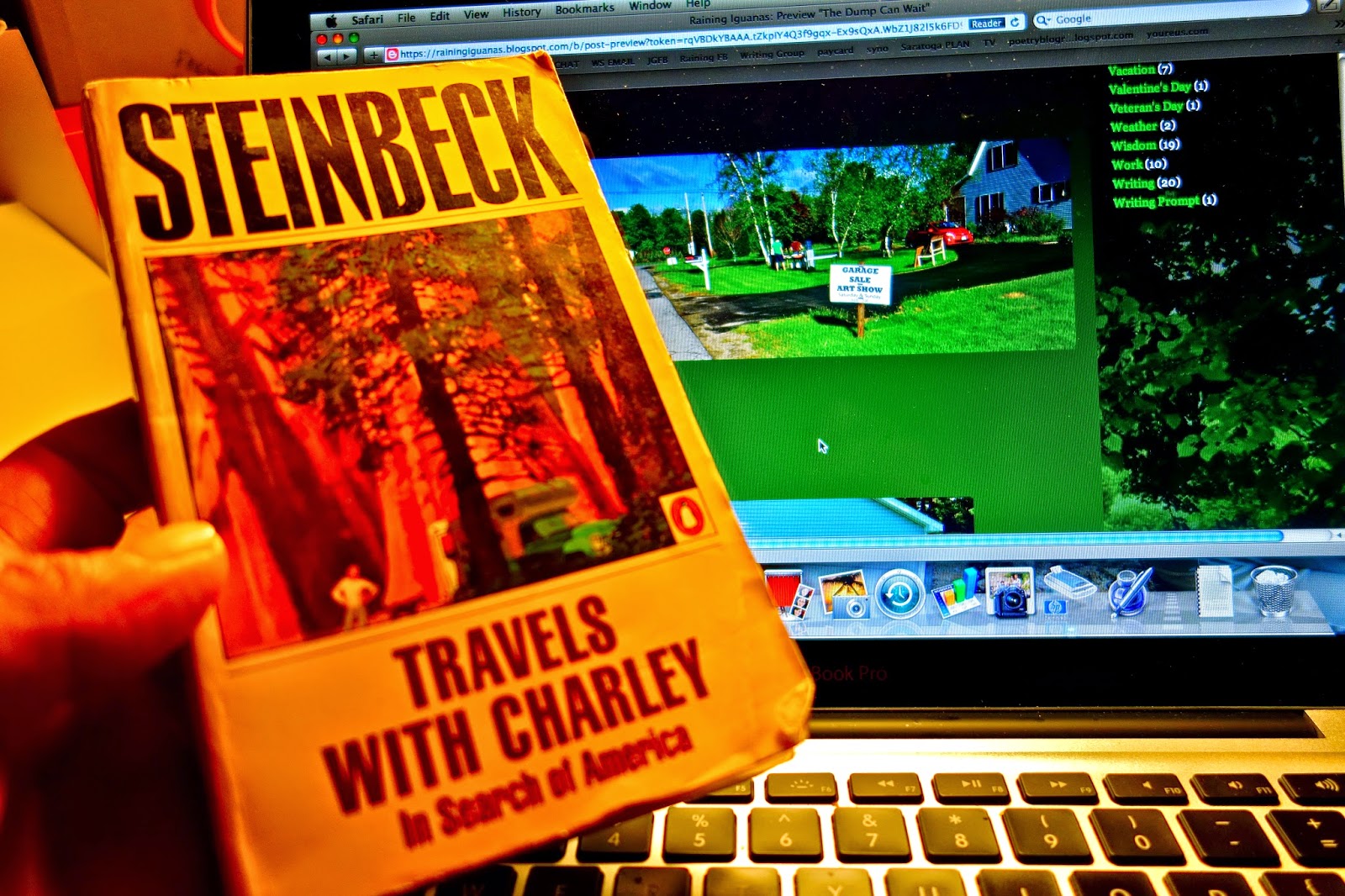 I did finally get some work done around the house today but I couldn't shake the circle of connections that once again drew me back to the keyboard and the camera. It was a simple sign that ended up as a flashing billboard and it brought me a $1.00 book that may just end up to be a priceless gift.


The moral of this long winded story about a Saturday in May is this:

If you see a sign in someones front yard that says "Garage Sale and Art Show" 9am-2pm; pull over and make sure you have some cash.

You never know what kind of treasure you'll find in the middle of a folding table.

Posted by Raining Iguanas at 9:56 PM