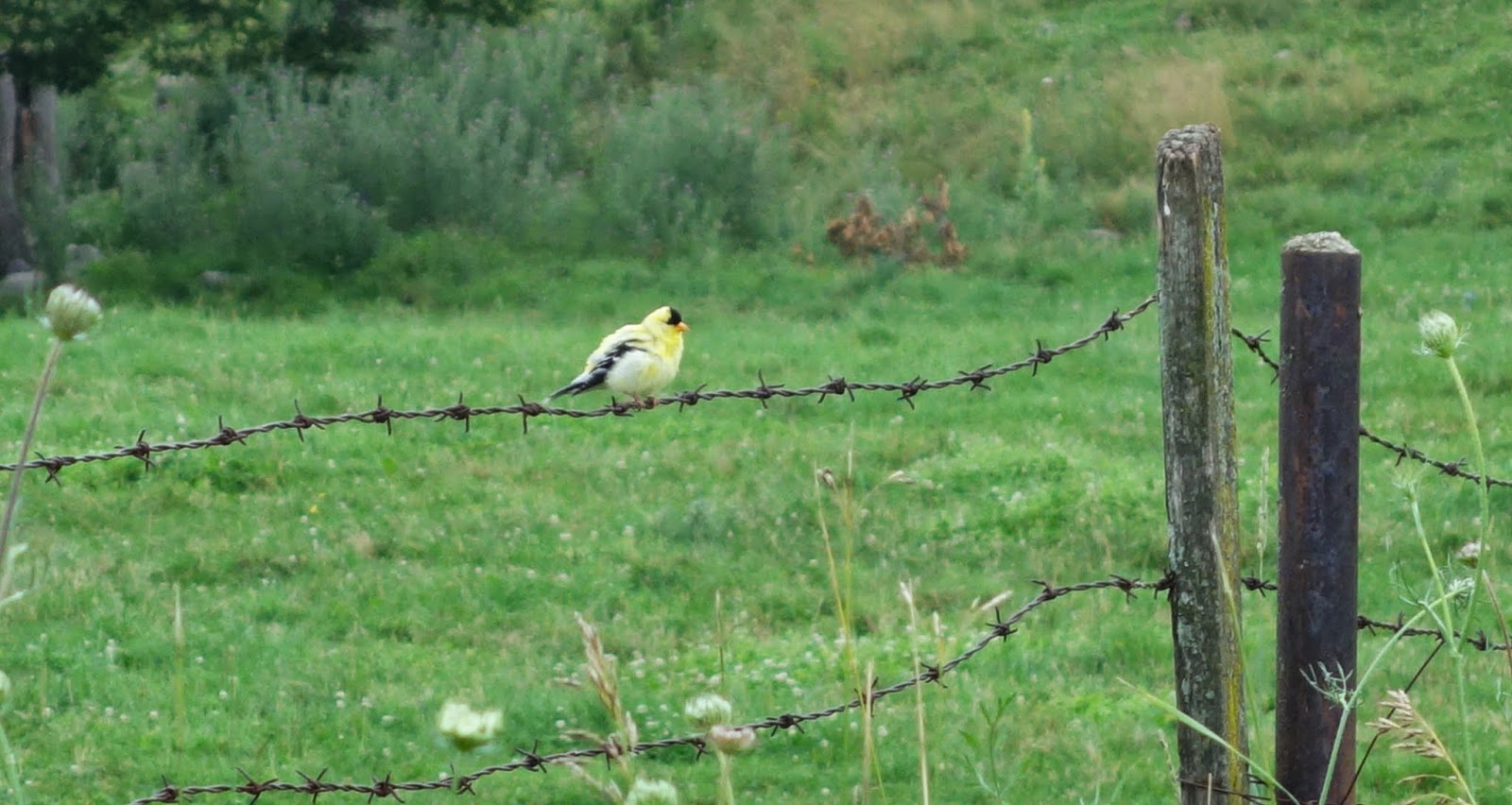 I captured this photograph quite by accident. I was walking out into a farmers field to take a photograph of the hillside beyond this fence when I caught a glimpse of yellow in  the corner of my eye. I saw this chubby beauty land on the fence in front of me. I didn’t have time to play with the camera I just clicked away. I don’t fuss much with settings anyway. I am a lazy and impatient photographer. I am more of an old time newspaper reporter out to capture the story. Someday I will know my nose form my aperture but for now I simply absorb and enjoy. I was caught off guard after I downloaded this to my computer and opened it. The scene sang with beauty and texture. I was mesmerized by the contrast between the rusty barbed wire and the yellow fluff-ball perched on it. It was a poem in a picture. A sense of calm overtook me. I couldn’t wait to put words to the scene I’d captured on a memory card. This is what fuels me everyday. The search for something speaking to me. It comes when I least expect it so I must always be prepared. This small example is what life is all about to me. It’s about keeping your eyes and ears open wide enough so they don’t miss anything going by. Life doesn’t always announce itself, sometimes you have to pluck it from the air like fireflies in the warm July darkness.

As I sank deeper into this piece something tapped me on the shoulder, hard like a bully poking you in the chest. I was suddenly reminded of one of the first pieces I ever wrote. It was back in 2008 and months before Raining Iguanas was born. I now knew what this photograph was trying to say to me. Below is the piece I wrote in 2008. It was done in a memoir writing workshop taught by Betty Cassidy, Professor Emeritus at SUNY Adirondack . I don’t recall the prompt but I’m sure it had to do with a vivid childhood memory. I left the font and content exactly as I wrote it at the time.

We all have regrets in our lives; one sticks like a wasp sting. An eight-year old boy and a BB gun intertwined to create a best/worst memory. It is inevitable, the hunter-gatherer instinct. We have it early. Maybe it’s curiosity.
Bird-on-a-wire.
Carefree boy with a gun.
One minute can define a person. I knew it was wrong. Every boy does. Will it excite or will it numb? I think I cried. I did not mean it. I am so sorry! Why, why did I do that? I was taught to appreciate nature. Even though it is a childhood moment, it clarifies and defines. Eight years later, I would kill my first and last deer. Two simple events in my life remain vivid in my mind. Simple events shape our lives and our personalities. I am glad those two moments make my heart ache so. Bird-on-a-wire please forgive me.

As you can clearly see the scene would have been quite similar yet the contrasting viewpoints between an 8 year-old boy in 1963 and that same boy in 2014 had a significant impact on me. I knew back then what I did was a mistake I couldn't take back. Although I still can't change what I did I can use it as a catalyst to bring emotions to the surface and add it to my writing. This is what life experiences are supposed to do. 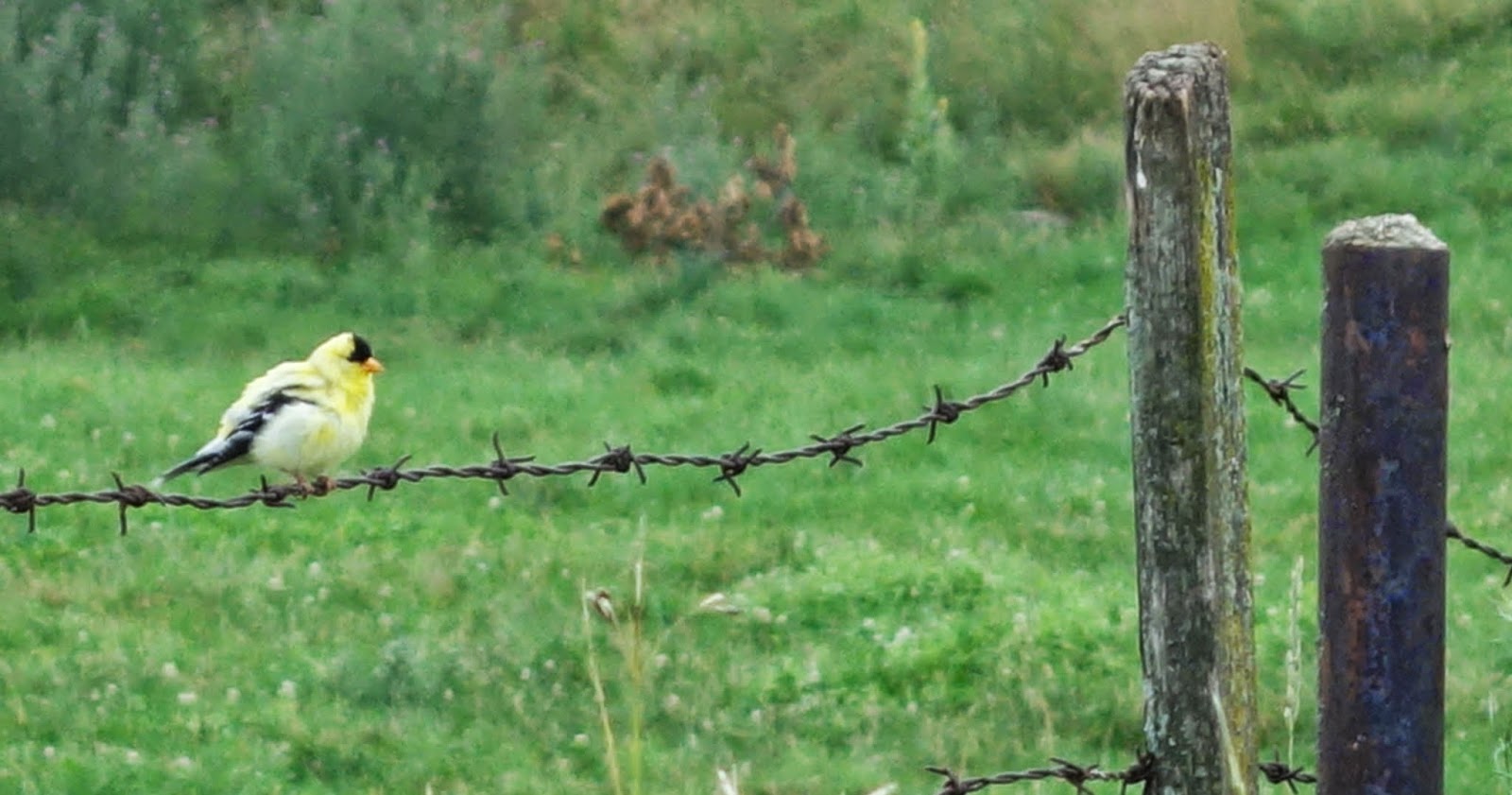 Sitting softly on the harshness of twisted wire my visitor speaks volumes to me. Her fear nonexistent even knowing of my past gun toting ways. Forgiveness becomes beautiful as it rests gently between locust posts splintered and rough. Contrasting textures sharing a fields edge define the moment that clings so tight to my mind. I repent and she accepts. My elder spirit renewed and free once again rejoices with the knowledge that nature understands better than we what lies ahead in the next field, on the the next fence...
Posted by Raining Iguanas at 10:37 PM