I met Ellen Foster at her wonderful home tucked away in the Rensselaer County town of Nassau N.Y. A steep gravel driveway wound up through the woods and deposited me in a place you could quite easily confuse with heaven. The home stood tall at the top of a ridge that overlooked a freshly mown meadow complete with an abundant garden full of flowers and happy vegetables.


I was quite confident that this chapter of my “Jack Lewis” fueled journey was about to become very special.

I was about thirty minutes early for our agreed 2:30pm meeting and Ellen wasn’t home yet. Because of the semi-remote location I did not want to risk being late or lost. Although I had my trusty friend Garmin with me, he has on occasion led me astray. I pulled my pickup into a pull-off spot several yards from the home, turned off the ke and rolled down my window. Seconds later I heard a security alarm echoing across the property. The alarm’s source was a hefty black lab perched strategically at the top of the porch steps. His deep chested warning-shot-barks made it perfectly clear I would need photo identification in hand before getting any closer to the house. I take direction from barking labs quite well. I may sometimes forget what my wife asked me to do five minutes ago but when big labs speak, Mr. Greenwood listens.

I was quite content waiting patiently in my truck for Ellen to arrive. I smiled as I imagined  her explaining to me just how friendly her security system really was. I’m also not much of a gambler.

As my watch struck 2:30 Ellen rolled up the driveway, driver’s window down, and a friendly wave extended high in the air.

With the security system now disarmed and wagging his tail I followed my hosts Ellen and her daughter Elizabeth inside.

The reason for todays visit was two-fold. The first was to see the original Jack Lewis watercolor of Ellen’s childhood home in Schuylerville. The painting that initiated this new found friendship. While tracing Jack Lewis’s journey to the Foster family farm in Schuylerville I’d been told Ellen possessed an original painting that Jack had done of the farm. Sight unseen Ellen graciously invited me to come and visit it at her home. She realized how excited I was to have located one of his paintings here in New York. The second reason for my visit was to share the documentary of Jack Lewis that I’d discovered existed through the help of the University of Delaware. Skidmore College provided access to it for me through their Interlibrary Lending Program. I knew Ellen would enjoy seeing the man she’d met in 1961 when she was a little one prepping for kindergarten. The bonus of the day was having Ellen’s daughter there to share the fun with her mother. The double bonus was seeing Ellen’s sister Betsy (Foster) Andersson walk in the door. Jack used one of the poems Betsy wrote as a young teenager in his book “The Hudson River.” I had not met her in person yet either. When I spoke to her on the phone a couple weeks ago I asked her if she still wrote poetry. She said sadly she did not. I asked her that day on the phone if she had any other poems that she may have written as a teenager. She said she thought she might have some tucked away somewhere. Imagine my surprise when she walked in with an old manilla folder stuffed full of papers. Not only did she have some poetry she’d written back in the early 60’s, she gave me permission to share it here on my blog. One piece in particular struck a chord with me. I think it envelopes the theme of my journey retracing Jack Lewis’s travels through the small towns and villages along the Hudson River perfectly. Here is a photo of Betsy’s original poem as she typed it back in the 60’s. 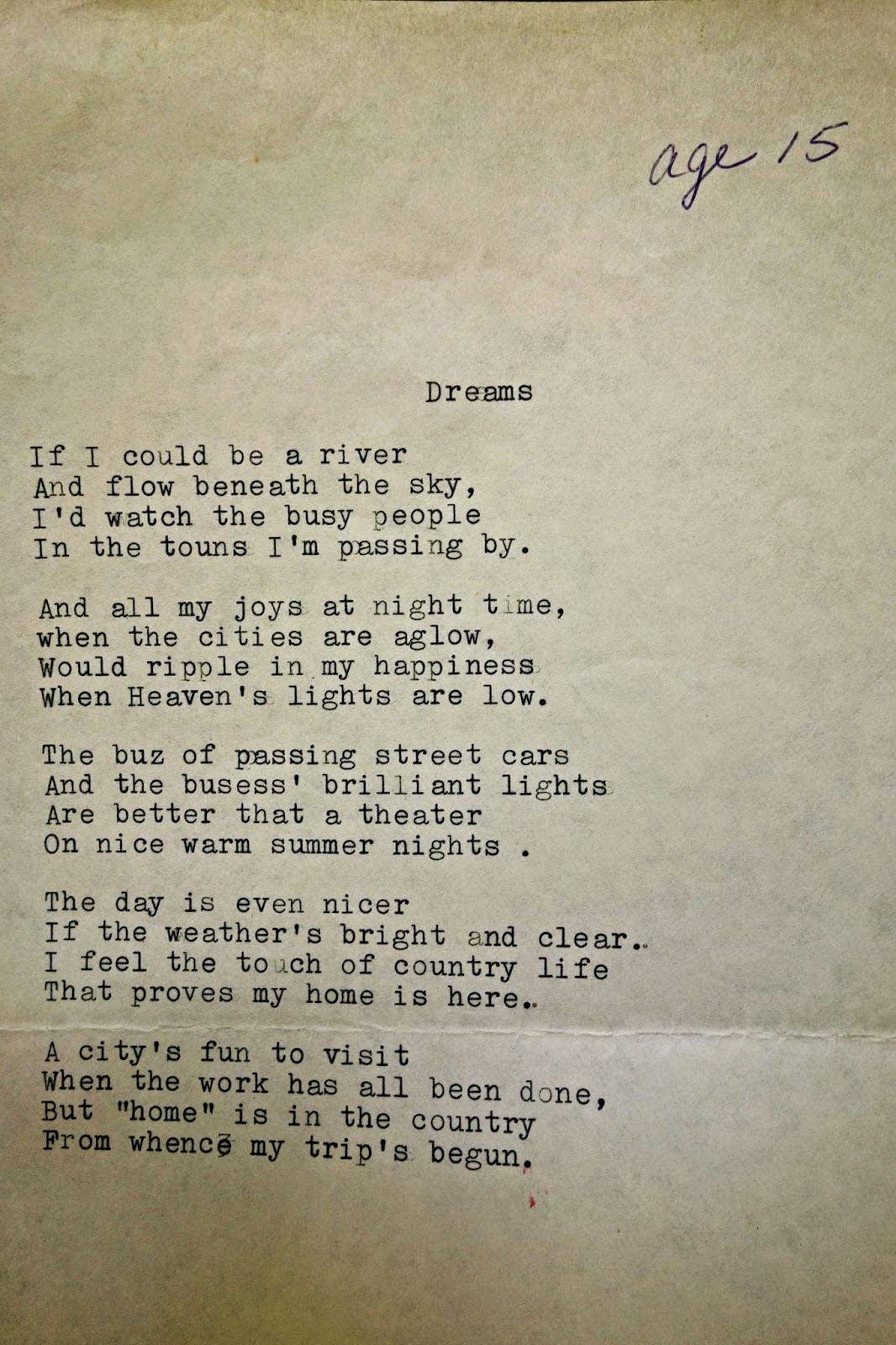 If I could be a river
And flow beneath the sky,
I’d watch the busy people
In the towns I’m passing by.

And all my joys at night time,
when the cities are aglow,
Would ripple in my happiness
When heaven’s lights are low.


The buzz of passing street cars
And the bus’s brilliant lights
Are better than a theater
On nice warm summer nights.


The day is even nicer
If the weather’s bright and clear.
I feel the touch of country life
That proves my home is here.

A city’s fun to visit
When the work has all been done,
But “home” is in the country
From whence my trip’s begun.

While we were all sitting there talking Betsy was sorting through her collection of papers. She looked up with a kind of wondering air and exclaimed, “I find it strange that I don’t recall Jack’s visit very well. I thought it would have made a bigger impression on me at the time.” I replied that maybe it was because she was a teenager busy with teenager things and that maybe she was preoccupied with what was going on in her life at the time. She looked at me with a soft gentle smile that slowly curled up. “No, I don’t think that was it. I didn’t have a life back then.”, she said. "We all had chores and work to do." She said she would mull over her poems while she was milking the cows and when she was done she would get out her mother’s typewriter and put them down on paper. I smiled back at her and said, “It’s not too late.”

The four of us sat there watching the documentary on Jack Lewis and talking about writing, family, and life’s surprises. I told them how I’d stopped in the small river-side village of Castleton on my way to Ellen’s house. I was looking for a home on Main Street that Jack painted and wrote about in his book back in 1962. It was an orange house with a turquoise door. According to the book he never spoke with the owners back then but he surmised they might possess an artist’s heart by the colors of the home. My short stop in Castleton that day revealed another astonishing surprise I’d never expected. I think I’ll save that story for another post.

Our visit came to an end when I realized if I didn’t get moving my wife, whom I’d dropped off at work, would be none too pleased if I was late picking her up on such a gorgeous summer day. I gathered up my books, papers, and laptop, said my good byes and headed to the door.

Before I could leave, Ellen generously handed me a bag of her home grown vegetables and a pint of fresh blueberries. As I left I couldn’t help but think of what Jack Lewis would have thought if he’d known his time spent enjoying the plentiful generosity of the Foster family had come full circle and continued on my behalf some fifty plus years later. For a story that began in the 60’s I couldn't help but feel it was just getting started.

Posted by Raining Iguanas at 9:29 PM