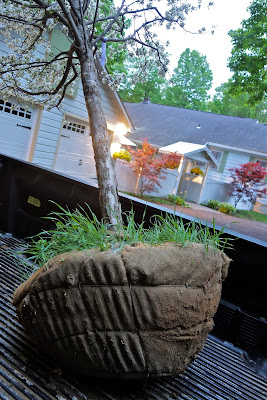 It was early Sunday morning and after a quiet night on the Tundra (Toyota) ‘Snow Flake’ was anxious to get down to earth. She appeared to be afraid of heights and was stretching her branches toward the new hole I had dug for her.

Before I could shake a leaf, I heard a knock at the back door. It was my cavalry. My youngest son and soon to be dad arrived at the break of dawn to rescue his father on Mother’s Day. We formulated a plan to get Snow Flake safely in the ground. It involved a collection of big boy tools like chains, ropes, tow straps, ramps, and a come-along. We backed the truck into position and remeasured the hole. After a fresh cup of coffee we began our engineering feat.

I estimated Snow Flake and her root ball weighed well over 750lbs. With neither of us having an AFLAC duck in our yard we proceeded cautiously and methodically. I live every day uttering the words, “Be Safe.”

This was no time to ignore my own advice. We hand winched Snow Flake to the tip of the trucks tailgate. It’s at times like this that you appreciate the sound advice your wife tried to give you, and you chose to ignore.

Unfortunately no matter how many times I tell myself, “She was right again.”, I still revert to moron status and do it my way. At least I had my son with me this time so he could learn by bad example what
not to do the next time he’s faced with choosing pride over intelligence.
So with 750 pounds resting precariously at the edge of the truck’s tailgate we jointly closed our eyes and inched her on to a pair of 2x6 ramps we built a few minutes earlier. Snow Flake’s decent was in motion. A few grunts, groans and, creaks later all three of us were on our way. At one point I saw one of Kevin’s eyes pop out, but other than that it was clear sailing. Snow Flake landed like her great-great-grandfather in the blizzard of 1888. Puff, kerplunk and we were on the ground and a foot away from her final resting place.

There are many adventures like this in my past. Some turned out well, some did not. Few turned out the way I planned. That’s pretty much life in general. What I have found in the last few years is to take things as they come. Don’t sweat the stuff you can’t control. Try to stay positive. The most important thing I've learned is this; women are smarter then men, especially the ones who have, "look after you leap"-husbands. They're used to cleaning up their miscalculations.

Posted by Raining Iguanas at 9:21 PM