Sleeping In Your Eggs

Sleeping In Your Eggs
By John R. Greenwood 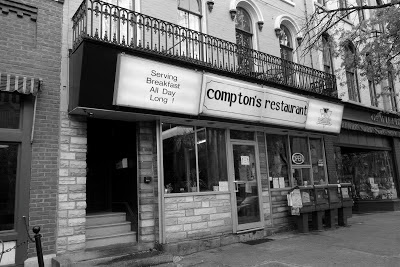 Compton's has been a Saratoga Springs landmark for over thirty years. I was a milkman throughout the 1980's and John Compton was one of my best customers. I delivered milk there every Monday, Wednesday, Friday, and Saturday for over ten years. I would get there about 4-5am. That was early Saturday morning for a milkman and late Friday night for the Caroline Street leftovers (Insert your name here-you know who you are). The restaurant would be packed with a vibrant collage of personalities, each one trying to speak over the other with another tall tale of the night. Most of the booths would be packed with happy drunks hungry after a long week of hard work and a short night of hard drinking. One morning I was lugging in a couple cases of milk and I see this kid sound asleep in a booth with his face buried in a plate of 'over-easy' eggs snoring little yellow yoke bubbles with every exhale. He was having his own version of breakfast in bed. It was free entertainment for me and everyone around him. I continued on to the kitchen like it was just another day on the job. When I asked John the owner what he was going to do he just smiled that ear-to-ear grin of his and said, "Nothing. I'll let him sleep it off. I found if I try to wake them up, they come up swinging. I let them wake up on their own, pay the bill and leave. No sense calling the cops, he hasn't hurt anyone." John was like that, calm and easy going. He also had kids of his own. He knew the drill.

This post was initiated by a painting by Saratoga Artist Robert Wheaton. Robert had done a painting of Compton's as part of his Saratoga Diner Collection. His post ignited this memory and many others that I collected in my years as a Saratoga milkman. It was so much fun I think I will dig up a few more to add to my, "Days as a Milkman" Collection.
Posted by Raining Iguanas at 9:05 PM

Email ThisBlogThis!Share to TwitterShare to FacebookShare to Pinterest
Labels: Days As A Milkman, Fun, Humor, Memories