If  you follow Raining Iguanas with any regularity, or if you just take a gander at the variety of my posts, you will notice a pattern. My view of the world depends on the day and how the light hits the window. Today's post is a bit off the beaten path. I was reading the post of a fellow blogger/writer recently. It was a story she had written about her deceased father. He had Alzheimer's and she was describing a day she had taken him to the movies. You can read it here. Her post reminded me of the various adventures I experienced with my father in his later years. One in particular takes me from one end of the emotional spectrum to the other. It happened shortly after he made the decision to move into an adult care facility. I don't know what the politically correct name is. It was by all accounts a nursing home environment. He knew it was the safest place to be at that point. He was capable of making the choice on his own and we discussed it for a long time before making the move. His room was on the fourth floor and he had been there for only a few weeks. He was adjusting. Whether it was well or hell, it was better that he had immediate access to help when he needed it. He was a man of routine by now. It was mostly out of necessity. He could only venture short distances and needed to be attached to oxygen most of the time. He needed his things close by. Once the nurses knew if they helped him get everything situated just so, he was relatively happy. Ultimately it made their life easier and him feeling more independent. But, and here's the but, if his routine was altered slightly he would find a way to make his voice heard. That voice manifested itself in many ways and it wasn't always verbal.
One day when I came to visit on my way home from work, the door was closed. Usually it was open. He liked watching the parade of activity in the hall. It gave him something to bitch about. That was a good thing. It gave him purpose.
When I opened the door he was sitting there pouting, obviously perturbed. He knew I was capable of reading between the lines. He counted on it. It saved him from having to ask for help. I was supposed to fix it without any exchange of words. This day it seemed a little more serious. "What's going on?" Finally I had to force a response. "Dad I can tell you're upset, what's wrong?" He turned in his wheelchair and pointed. "Will you please push that damn door open. I keep asking them to leave it open. If they don't push the door tight to the magnets it closes. I give up!" That is when I notice this yellow sign taped to the door.

I stood there and read it. I didn't know whether to laugh or cry. I still don't. All I know for sure is, on that day, it took my breath away. It obviously had an impact on me because I gently pulled the sign down and I've saved it. I also walked directly to the nurses station that day and opened the door of communication wide, real wide. Mostly I am a nice person. On this day I was an elder advocate to the tenth degree. I never found the door closed again.
This is not the end of the story. Here it is a few years later. I was prompted to write this piece by my friend's post. I go to one of the dozens of binders where I keep my, 'stuff' and I pull out the sign I saved and I scan it on the computer. I began to adjust the clarity to get the clearest copy possible so that it was easy to see. In my effort I slide the highlights adjustment and all of a sudden I realized there was writing on the back of my father's emphatic directive. I tried reading it backwards as if it was some ghost message from the past. There was something a bit eerie about the whole thing. I opened the cover of the scanner and slowly flipped over the hand written sign. This is what was on the back (front) side of dad's sign. 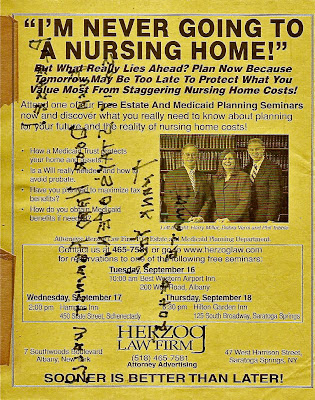 My father led a full and eventful life. He loved to hunt and fish. He did both as much as possible and more than most. He loved to have a good time with drink and friends. There weren't long stretches where that didn't happen. He never wanted to spend his last years fighting poor health and emergency room visits in the middle of the night, but who does. He knew the reality of the situation and he handled it better than most. One thing I am sure of. In his subliminal--and authority taunting way, he wrote that sign on the back of this sensationalizing and scare tactic advertisement on purpose. It was his way of fighting back. It was his protest sign. I knew it when I saw it. He knew I would understand. He was counting on it.

Posted by Raining Iguanas at 5:36 PM