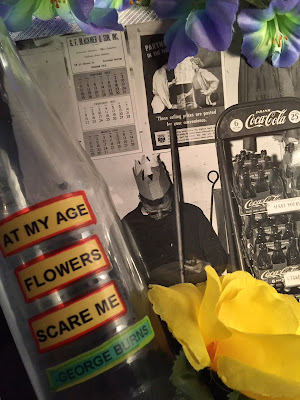 “At my age flowers scare me,” is a great quote by one of the greats, George Burns. George has been gone awhile now and it’s sad to say but I’ll bet there’s only a handful of people I work with who even remember George in “Oh God”. There’s only a few more that even remember John Denver. It’s funny to think about that movie being at the end of George’s career. There's no more than a pinch of readers here who would even know about George and Gracie so I won't even go there. Even though George Burns and Gracie Allen were ahead of my time, there was still enough remnants left when I was growing up for me to have a deep affinity for them both.

I thought George’s line would generate a smile or two. I smile out loud thinking about some kid in his thirties trying to figure out what it even means. What it says to me now is—you might just as well laugh about old age because it’s rolling toward you so fast you wouldn’t be able to jump out of the way if your tried. George Burns was born in NYC in 1896 and lived to be 100yrs old. He kept us laughing until the end. If you’re reading this and you’ve never heard of George Burns Google him, and watch a few clips.

George handled age like whisking lint off a sweater sleeve. I’m doing my best to follow his lead.

To date I haven’t gotten any feedback from any bottle catchers other than my friend Diane who graciously did a catch and release (Please don't say anything, but I made her a special replacement bottle). The interest seems to have collected some momentum. To all of you who have been kind enough to follow along, I thank you. I have to admit it’s been fun thinking about where these bottles are ending up? I may never know. I have plenty of bottles to keep me going and if necessary I just might start sending a random olive or pickle jar out for adoption. Whatever happens it’s a little distraction from the madness of the news. I don’t turn things off completely but I do adjust the floodgate according to my tolerance level on any given day. I feel I’ve earned the right to call it a day when the nastiness of the world around me becomes too much to handle.

“Retirement at sixty-five is ridiculous. When I was sixty-five I still had pimples.” —George Burns

Posted by Raining Iguanas at 8:35 AM