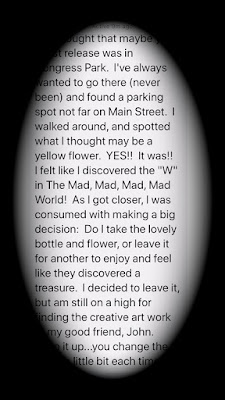 My phone plinged with that Instant Message pling last night after dinner. It was “Merganser's Crossing’s” Diane Fiore. Diane and I became friends when we were both invited to become members of Jon Katz’s original Hubbard Hall Writing Group back in 2012. Diane had been following my “Bottle Project” as she called it, and had messaged me a fun little story. When I asked if she minded if I share it, she never hesitated.

She had just read my piece on the release of Bottle #4. At the top of that piece I included a semi-detectable photo of where the bottle was left. Diane is from Clifton Park and although she was familiar with Congress Park she said she’d never actually visited it. She thought she recognized the park as the place I’d left Bottle #4. She had some errands in the area so she decided to see if there was a chance she might be able locate the bottle. She said she found a parking spot on Broadway and headed into the park on her bottle expedition. Because this was her first visit to Congress Park it took a little exploring to get her bearings from the photograph. It wasn’t long before she caught a glimpse of yellow out of the corner of her eye. Sure enough the bottle was still where I’d abandoned it. She compared the discovery to finding the $350,000.00 under the big “W” in “It's A Mad,Mad,Mad,Mad World.” She now admittedly had a dilemma. Should she keep her new found treasure or leave it for another person to find? If you knew Diane you would already know the answer. Being a spirit of immense generosity and thoughtfulness the bottle was left as found. She practiced what we call basic bottle-catch-and-release by snapping a picture with her phone and walking away.

I answered her message and explained that I was worried people might think I’d lost my mind. As expected her reply assured me my crazy “bottle project” was anything but. The ultimate encourager, she called my madness enthralling—which may be a little strong. For me it’s surviving the Winter of 2018. To date there’s four orphaned bottles roaming around out there, all hoping to stir the curiosity of an eagle-eyed dog walker, enthrall the wonder of a dear friend, or entertain the creative side of a senile old man with a snow covered lawn and no kids around to chase away.