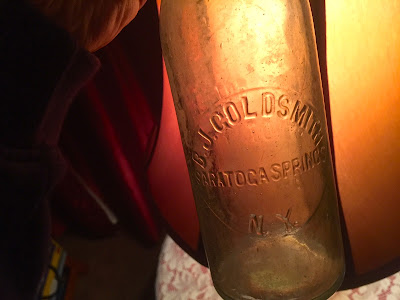 First I’ll give you an update on the last two posts and where we stand. I released Bottle #2 into the wild this morning. Like Bottle #1, I have no idea if it found a new home or not. Hopefully it’s not out on the streets of Saratoga shivering in the wind and cold. I’m a glass-half-full guy. I’m picturing them both centered on someone’s fireplace mantle being warmed by the ember’s of a maple log and spreading their message to all who pass by. Although I have nothing to share on the whereabouts of Bottle #1 and Bottle #2, the beginning of their adventure has already placed me at the doorstep of another. This morning after I finished my old-man workout in the cellar I went over to the shelves where I store my crates of old bottles. I was looking for another spirit to release in to the wild, but I didn’t look, I simply reached into one of the old wooden crates and pulled out a random bottle. It almost jumped into my hand. 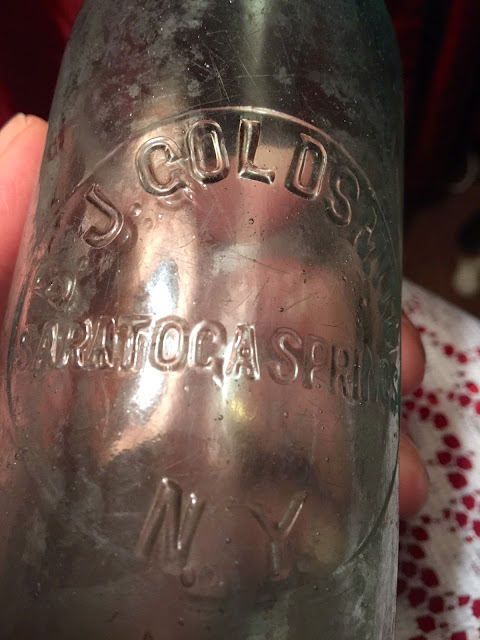 Although the bottle was covered in several years of dirt and dust the embossed name B.J. Goldsmith was crystal clear. In letters just as clear below the name were the words Saratoga Springs N.Y. My eyes widened and my pulse raced faster than it did when I was tearing up the treadmill minutes earlier. That bottle has been nestled in that same spot for ten years and was on a display shelf in my parents home for probably another thirty years before that, and I never paid one bit of attention to it. Now in my sixties and with the knowledge that I delivered milk to three legendary Goldsmith restaurants in the 1980s I was speechless. From 1979-1989 I delivered milk twice a week to Mother Goldsmiths and The Country Gentleman, both owned by Nate Goldsmith. I also delivered to Lou’s Luncheonette on Broadway in 1979 the year owner Lou Goldsmith retired. I was a friend and classmate of Stu Goldsmith his son. I had little doubt this bottle from the 1800’s wasn’t connected in some way. I raced up the cellar stairs to get Googling.

It took approximately 30 seconds to tap into a vein of information pertaining to my cellar find. Almost instantly a photo of the very bottle I was holding in my hand popped up on the screen. It was a Pinterest site. I clicked on the photo and was transported to the Disney of bottle collecting sites, ricksbottleroom.com I had found antique bottle nirvana. It wasn’t just the fact that the site was well constructed visually, it was also because it highlighted so many local bottles, many of which I recognized. I’m not an antique bottle collector. My father and I enjoyed the hobby of digging old bottle dumps for a couple of years together back in the 1970s. He continued on after I got married and enjoyed it for many more. I inherited his collection when my parents sold their home and downsized. I cherish them for their stories but I never had the room to display them.

The next obvious step for me was to try and contact the owner of ricksbottleroom.com to see if the bottle I had in my hand was of any value. I began my investigative journey. Unearthing Rick’s full name was like digging an old bottle dump. I knew there was something good there, I just needed to find it—and I did. Next step of course, is Facebook. Snap! There he is clear as day. Next I check the "About" tab to see if Rick is a sharer of information or if he's a closed book. Whoa! I see he lists the place where he works. I have a friend Dave on Facebook who lives around the corner who works at the same place. Without so much as a second thought I send Dave an Instant Message and ask him if he knows Rick. An hour later my phone buzzes. Not only does he know him, he says he will see him at 5pm when he gets to work. You have to love Google! I ask Dave if he would mind sharing my phone number with Rick and ask him to call me when he can. Knowing Rick is such an avid fan and collector of antique bottles I’m confident he will call within minutes. He does.

So, less than 8 hours after my bottle dig in the cellar I have a human encyclopedia of bottle knowledge on the other end of the phone. Because we’re both at our jobs the conversation is brief. We exchange a little information and promise to talk as soon as we’re off work. Rick offers to evaluate my collection and help answer any questions I might have.

I only have one question.

How much is the B.J. Goldsmith blob top worth?

Well let's just say its enough for a fill-up. 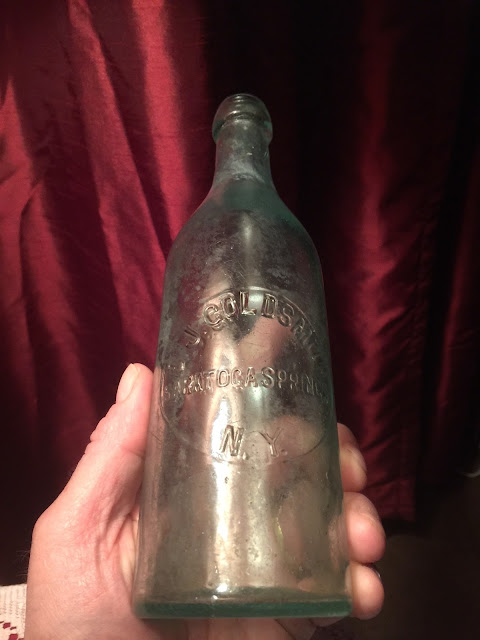 The information below was excavated from ricksbottleroom.com
I highly recommend a visit to his page. It's a beauty

Goldsmith, Benjamin Judah was born in Russia, Poland, March 15, 1840. He came to the United States in 1857, settling first in New York, where he learned the cigarmaker's trade. He remained in that city until 1863, when he moved to Saratoga Springs. He was engaged in the manufacture of cigars there from 1865 to 1873. He established himself in the wine, liquor and cigar business. Mr. Goldsmith was a member of the board of directors of the First National Bank of Saratoga Springs. N. Y. He was twice married; his first wife was Mary J. Howe. who died in 1872, leaving one daughter, Nina; and his second wife was Eliza Cohn, and they had one son, Irving Goldsmith.

Posted by Raining Iguanas at 10:51 PM