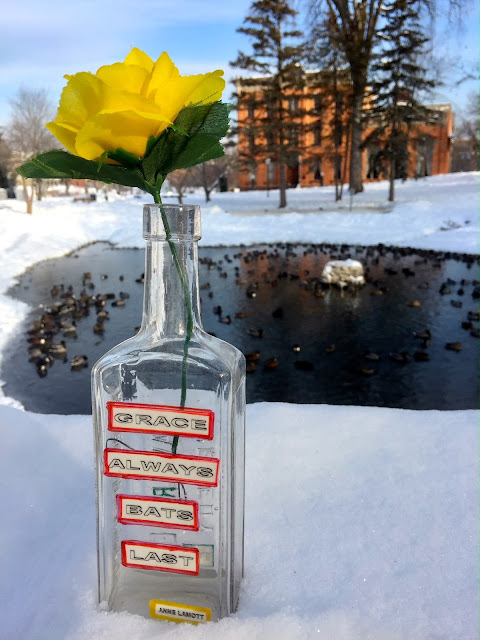 “Grace Always Bats Last,” a quote by Anne Lamott is another favorite of mine. I couldn’t wait to place it on Bottle #4. Once it was on there I had a hard time letting it go. Another quote of Anne’s helped me along, “Grace finds you exactly where you are but it doesn’t leave you where it found you.” So, whatever is pulling me along this crazy little journey seemed to be telling me not to stall on the tracks—keeping chugging along.

As I ease into my years of ancient wisdom I’ve learned you can absorb a great deal of joy by celebrating others—especially the quiet people who run the edge of the spotlight and live in the shadows of those with loud voices and vacant thought. Grace is a beautiful word all by itself. Place it in the quote on #4 and it says to me that grace will always outlast hate and chest pounding. The toughest people I’ve known were the least visible, the least heard. The ones no one paid any attention to. I guess thats why I’ve always embraced the underdog, the face in the shadow, the Rudy Ruettiger’s of the world. Boisterous is no match for grace. Grace sits and waits patiently for the fast and furious to run out of gas, then she coasts by without a glance.

When I released, “Grace Always Bats Last” I stood there a minute reflecting on the path my life has taken. I began to think about what I was doing right now. Leaving an old bottle with a simple message and a plastic flower in it, in the middle of a park, in the middle of a city where I made friends and learned lessons too numerous to count. I saw a city reborn and refilled with faces I’d never be able to put a name to. It has been a good ride and I’m not prepared for it to stop. For now I’ll plunk in more quarters and go around a few more times. I’ll do it with purpose and compassion. I’m not weakening with age, I’m gaining strength. I’m not smarter, I’m wiser. I’m packing grace into every corner of my journey.

It was hard to set #4 free, but if it passes grace along I’ll be happy.

As I drove to the place where I planned to release #4, I passed the release point of another bottle. I had to do a double take. To my amazement one of the bottles and it’s message was still sitting there proud and untouched. An adrenaline rush and a big smile filled my morning.

Posted by Raining Iguanas at 8:26 AM