Be The Reason (Bottle #5)
By John R. Greenwood 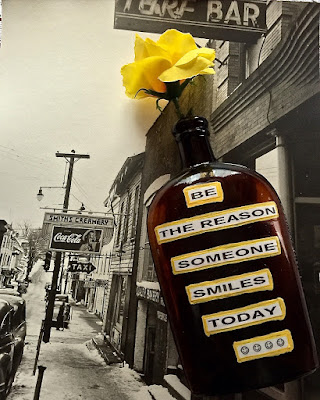 Yesterday I was in the passenger seat of a Freightliner making deliveries with one of my drivers. We were on State St. in Schenectady. If you’ve traveled it you know it can get a little crazy in the morning. We were within sight of our destination when we both noticed the stopped minivan ahead of us. The rear hatch had popped open and left a mountain of newspaper bundles covering the road. It looked like a dump truck spreading a load of gravel. The bundles were scattered far and wide. The gentleman driving had jumped out and was desperately trying to save his lost cargo. Cars were honking and swerving all around the poor man and his unexpected catastrophe. My driver stopped well back but that didn't keep cars from blasting by us and the scattered cargo. I jumped out and I told him to go to the store we were delivering to, a hundred yards away. I began scooping up newspaper bundles like a mother scooping up a runaway toddler. I placed them in neat stacks on the curb as the unfortunate, grey haired newspaper boy began reloading his squatting minivan. When I had all the papers stacked neatly on the edge of the busy street I ran over to our truck and I grabbed a handcart. I began wheeling the stacks over to the other panting grandpa. In the end we safely rescued every escaped newspaper.

There in the middle of a chaotic Electric City thoroughfare stood two out-of-breath men of advanced years smiling from ear to ear at each other. With no words necessary we simultaneously reached out and shook hands. It was simple gesture that stuck with me for the entire day. I knew, he knew, that it was times like that, that we feel blessed by the kindness of strangers. In those moments, no credit card or bulging wallet can recreate two old men having their own little Hallmark moment. One of those moments when you feel there's still a glimmer of hope in the world. He didn’t need to express any gratitude, I was way ahead of him. I was reveling in the silent handshake of a random act, a random slice of life as it happens.

With that thought safely packed away, I went home and quickly placed this simple quote on Bottle #5 and released it in Saratoga Springs early the next morning. I didn’t dare wait another minute. Have you watched the news lately?

Be the reason someone smiles today...

Posted by Raining Iguanas at 7:30 PM