Released Into The Wild (Bottle #2)

Released Into The Wild (Bottle #2)
By John R. Greenwood 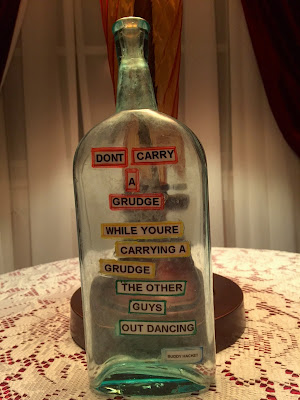 After the mini-adrenaline rush I got after releasing Bottle #1 into the wild yesterday I can’t wait to release Bottle #2 tomorrow. I have a couple of ideas of where that might be but I won’t make a final decision until the actual release. Bottle #1 remained in place for most of yesterday but when I drove by this morning it was gone. Someone within the sound of my written voice is now in possession of “KINDNESS IS CONTAGIOUS. PASS IT ON.” I hope Bottle #1 found a good home. I'm even more hopeful I hear from it’s new owner someday, so I can share the story here at Raining Iguanas. It's fun to know that my simple art piece is out there roaming the streets right now.

While Bottle #2 carries another important message, it does it in a way that will bring a smile to your face. It’s been a favorite of mine and I’ve had to call on it many times over the years.
“DON’T CARRY A GRUDGE.
WHILE YOU’RE CARRYING THE GRUDGE
THE OTHER GUYS OUT  DANCING.”
- Buddy Hackett

People as old as dirt will remember Buddy Hackett. Say the quote above out loud and do it while hearing Buddy’s voice and picturing his face and your teeth will be showing and the corner’s of your mouth will be reaching for your earlobes.

Here’s the reality of this experiment. It’s a way to stay alive in a world fraught with anger and finger pointing. Create something and send it on it’s way. No strings attached except for the faint hope it might return one day filled with someone else’s story. I have lots of bottles and lots of quotes. I have a long list of better things to do with my time—but for now I’m going to continue with this crazy idea because something is pushing me to. It’s hard to explain why painters need to paint, sculptors need to sculpt, and writers need to write but theres something buried beneath the surface that never stops trying to escape. The more you try to divert or quench, the more you twist and turn until you feel like your mind is ready to explode. While the mature adult in me is whispering, What the hell are you doing?”, a voice on my shoulder is screaming at me not to stop. Never one to listen to sound advice without first falling on my face a half dozen times I forge ahead with this crazy notion that there is a rational reason at the end of my road.

Talk to you soon…
Posted by Raining Iguanas at 7:56 PM