My Friend Is Back 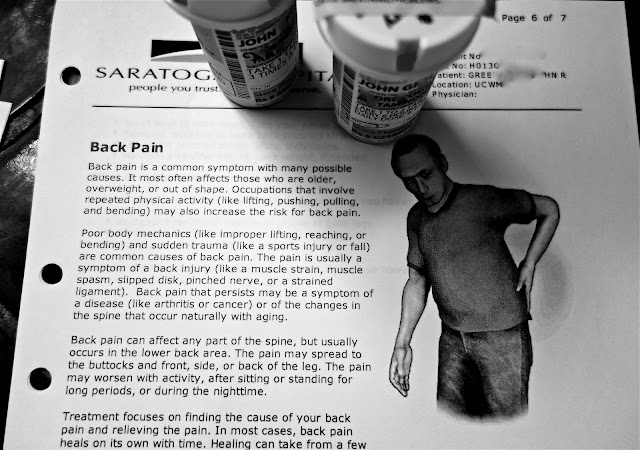 My Friend Is Back
By John R. Greenwood

This post is about a dear friend of mine--my back. My friend the back has been there for me for many years. Beginning in the tall pine trees where I learned to climb high above the world and view it through the eyes of a seven year old boy to the present day some fifty years later. My back has paid the mortgage for close to four decades. MB as I will refer to him in this piece as, has always done his job - even when I tested his limits. I did that recently and I feel he is owed an apology. I never meant to hurt you MB. It was one of those manly-man times where you (MB) were really strutting your stuff. The more frequent my early morning workouts the better we both felt. Projects were getting done as fast as ambition could keep up. There has never been a question of your willingness to man-up.

I haven’t been as good to you as you have been to me. I have abused you with handling thousands of cases of milk over the years. When the bills are paid based on how much milk you take off the truck it’s pretty much a given you (MB) are going to take your lumps. There were many years in the 1980's where I topped off the day delivering overloaded pickup trucks full of 50 lb. bags of ice just to see if you could stand tall. You did of course, and then some.

As a homeowner, drainage ditches and fence post holes were simple practice drills for you. The years when you were busy keeping up with two active sons seemed to be when you were happiest. Whether you were swinging them happily in big wide circles by the arms or carrying them proudly through the mall in their toddler years you always did it with the same dad-like pride as the man in front of you.

You never asked for more of a reward than an occasional day fishing or a fall hike in the woods. Only now do you get a well deserved nap once in awhile. Even those are not to appease you. They are mostly due to increased opportunity not need.

In our teen years you carried me up and down high school soccer fields, YMCA basketball courts, and through day long tackle football games in backyards throughout the village of Greenfield Center where we grew strong together. You stabilized me safely on the lightly padded seats of Lil' Indian minibikes, Honda motorcycles, and Ski Doo snowmobiles. You stood behind me proudly as a volunteer fireman as I sprayed burning embers with a powerfully charged two and a half inch nozzle spray.

This past weekend I pushed your limits and we both fell victim. I tested you and failed you. You did your job. I should have been kinder. I must look out for those who have been there for me. When you couldn't take any more you gave out. Even then you found it difficult to wave the white flag. You were in denial but it was clear. You were down for the count. After an hour of trying to muscle me through the afternoon we both said enough is enough and headed slowly, baby step by baby step to the parking lot. Pain unlike anything either of us have ever experienced overtook us.

It was a long night. Over the counter pain pills were like trying to feed a hungry Rottweiler half a Milkbone for dinner. A large man lay in the fetal position broken and exhausted. A short fifteen foot walk to the bathroom would seem like the last half mile climb to the top of Everest.

Morning would come in what seemed like a week later. Any abrupt move or twist felt like a train wreck. Mrs G. stood by the side of the bed giving me sympathetic words of support. This problem is one she could not fix with her wife-magicwand. There wasn't much either one of us could do. I needed to wait this one out. I insisted she go to work because my whining would most likely hurt her ears and might cause irreparable damage to her hearing if she didn't leave the property.

As she pulled out of the driveway I dialed my boss. "I don't think I'm going to make it in today," I whimpered. These were words he rarely heard from this phone number. He understood. He was in the middle of a DIY retaining wall project himself. Men don't usually feel too sorry for other men in pain. This was an exception. He knew the pain in the phone was real. He offered to come and take me to the doctor. My man-pride refused. I was going to take a shower and get there on my own, even if it killed me. Baby steps began again. I had a doctor to see and life to live.

The pre-doctor visit prep would be a condensed and abbreviated one today. The most reachable pair of pants and clean t-shirt would suffice. Loafers with no socks were a given. I found an old cane carved by my grandfather back in the 30's in the closet. I grabbed my keys and check book. I ran shuffled to the door, eased down the back steps, inched my way behind the wheel, and thought to myself, "Mrs. G is going to kill me, bad back and all!"

As I sat in the parking lot of Wilton Medical Arts trying to assess my ability to make it all the way inside I observed waves of gray shuffling past my windshield. It was depressing to say the least. I suddenly had a vision of me and a dozen others in my condition lined up in the starting gate over at the Saratoga Racecourse patiently waiting for the bell to ring and the gates to fling open. "And their off!" was echoing through my head. I got to the front door safely. I had reached the quarter-pole. This would be a heck of a finish.

The poor receptionist winced as though she could feel the pain as I answered her question, "What are you here for today?" She assured me she would get me assistance as quickly as possible. So far I was glad I had decided not to wait another minute.

A nurse came to get me a short time later. He walked briskly. He lost me at the first turn. I finally caught up and he deposited me in Room #2. As he took my blood pressure and temperature Nurse Claudia entered. She would need more info. Date of birth is always on the list. "Weight?", is always the one where my nose inexplicably begins to hurt. Fortunately she did not verify and expose my lie today.

This is where the day took a happy turn.

In Claudia's effort to provide comfort to a patient who replied, "#9" to the pain scale question, she tried to incorporate some small talk. Somehow the conversation led to her dogs. Whenever I am engaged in small talk with a stranger and a dog is mentioned I inevitably ask, "Are you familiar with Jon Katz?" This conversation was no exception. Claudia stopped dead in her tracks and with eyes instantly widened she responded, "Are you kidding? We went to his Dancing Dogs book signing at Battenkill Books last night. It was wonderful!" She had no way of knowing that my pain was really a #10 today because I missed Jon's book signing due to my back. I had been looking forward for days, to a trip to Cambridge and my favorite book store Battenkill Books. I now made her stop at the door. "I am in a writing group that Jon is heading." I said excitedly. A back and forth your kidding, no I'm not ping pong game ensued. She disappeared for a moment and returned pulling her coworker Heather by the arm into the room. "He knows Jon Katz!",  Claudia said to Heather. Another ping pong game followed. Heather proceeded to tell me of how Jon's book, Going Home, had fallen off a bookstore shelf onto her foot one day, shortly after she had lost her beloved pet. So here we were, three big Katz fans talking about life, and death, smiling and sharing a feel good story. My back pain dropped to a #6 within minutes. The pen I held in my hand began to quiver. The pad in my pocket seemed to rocket into the other hand. "Would you mind giving me your first names? I think I have a blog post brewing here."

By the time Dr. Jennifer entered the room I was on my way to recovery. She agreed with my self diagnosis that my pain was from over-exertion. She said with a week of taking it easy and a couple days of muscle relaxers and anti-inflamatories, that I would be just fine. I thanked her for her help and told her I felt better already.

* I would like to thank everyone at Wilton Medical Arts. Their caring and attentive staff took an extremely painful morning and turned it into a very comforting and pleasant day. We are lucky to have them.
Yours truly,
John R. Greenwood

Posted by Raining Iguanas at 8:02 PM